Now, here's a, both interesting and disturbing, rumor I've just read over at "Aceshowbiz": the star of the upcoming movie "Beastly", young Vanessa Hudgens might be wearing the Spider-Woman costume in the future. She is apparently in talks with filmmakers to star in a film which will focus on the super heroine who first appeared in Marvel Comics in 1944. 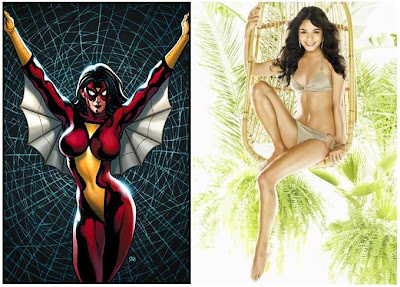 They plan to make a fun, comedic movie in which Spider-Woman is strong and sexy but also funny and according to rumors Vanessa is very interested in the whole idea. So, what do you think about this? The same scary news as Taylor Swift possibly playing Supergirl?!?
Posted by DEZMOND at 7:39 PM