HOLLYWOOD SPY has already informed you how Vin Diesel is officially planning to make a new movie in his sf "Chronicles of Riddick" franchise, and now we have the first piece of concept art from the upcoming movie. Vin Diesel has recently posted the concept art himself on his Facebook profile. 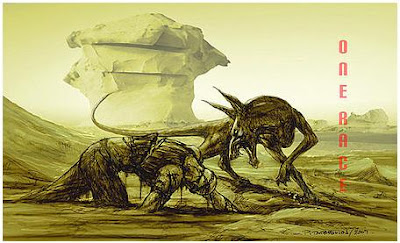 "Riddick" will again be directed by David Twohy who also wrote the script. In the third film of the popular sf saga, Riddick, the most wanted man in the galaxy, is left for dead on a barren alien planet, dealing with trisons (three-legged bisons) and mud demons. He will also have to deal with two squads of bounty hunters, which ride some very cool rockets called jetcycles. We will keep you updated on the project.
Posted by DEZMOND at 9:29 PM