Almost a year ago, HOLLYWOOD SPY reported how China is planning to make a huge underwater blockbuster with mermaids and all kinds of sea monsters with Monica Bellucci as the lead actress and Pitof as director. Now, with the shooting already begun, it seems a lot of changes have taken place in the whole production. 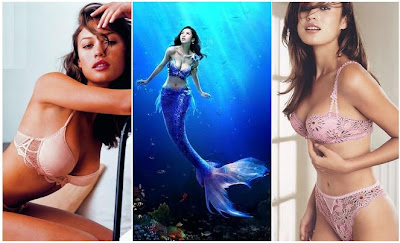 "Empires of the Deep", with the $100 million budget, has already made a record as the largest 3D production in China's film history. This fantasy adventure is co-directed by Michael French and Jonathan Lawrence, and according to the latest news instead of Bellucci, the film will have stunning Olga Kurylenko as the Queen of the Mermaid Empire alongside male lead Steve Polites and Liang Yanfei. Anthony Arendt, virtual camera operator in "Avatar" has also come aboard the film.
"Empires of the Deep" will follow a young man's journey through a mythical underwater mermaid kingdom, where he is trying to rescue his father, while encountering some of the most ferocious creatures the sea kingdom has to offer.
Posted by DEZMOND at 10:07 PM