JASON STATHAM AND CLIVE OWEN ARE "THE KILLER ELITE"

Now, if you like genuine British hunks, you will enjoy this one. According to "Variety" Clive Owen and Jason Statham will star together in "The Killer Elite". The film centers on a group of British former special forces soldiers who become hunted by a team of ruthless assassins, lead by Jason Statham's character. Clive Owen will play a top field agent for a spy organization that protects the British soldiers and their families. 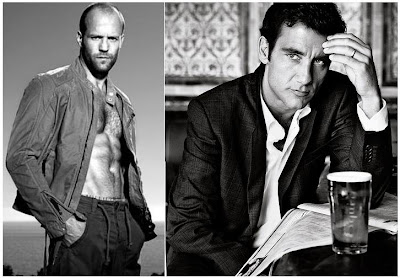 Since he obviously likes playing killers, after we see him this summer in "The Expendables" Jason Statham will also star in "The Mechanic" an action-thriller centered on an assassin and his apprentice (Ben Foster). On the other side, it seems Clive Owen adores playing cops and special agents, and if you go over to IMDB and check his list, you will see that all of his upcoming projects present him in detective or agent roles.
Posted by DEZMOND at 10:04 PM