THE FIRST TRAILER FOR "THE PILLARS OF THE EARTH"

The first trailer for the eight part $40 million historical mini series "The Pillars of the Earth" coming to Starz this July has just been released. This adaptation of Ken Follett's famous novel is set against a backdrop of war, religious strife and power struggles which tears lives and families apart. In that time, there rises a magnificent Cathedral in Kingsbridge. 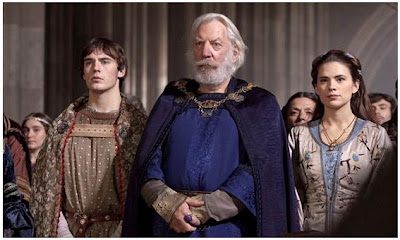 Against the backdrop, love-stories entwine: Tom (Rufus Sewell), the master builder, Aliena (Hayley Atwell), the noblewoman, the sadistic Lord William (David Oakes), Philip (Matthew MacFadyen), the prior of Kingsbridge, Jack (Eddie Redmayne), the artist in stone work and Ellen (Natalia Worner), the woman from the forest who casts a curse. At once, this is a sensuous and enduring love story and an epic that shines with the fierce spirit of a passionate age. Follett masterfully weaves these stories through political turmoil of 12th century England, creating a relevant and viable world for today's audience and for generations to come. The cast also includes Ian McShane and Donald Sutherland. Judging from the trailer, I must admit I've expected something a bit more, and I don't really like the female part of the cast, but I will still check it out this summer.