WARNER BROS. PREPARES "LEONARDO DA VINCI AND THE SOLDIERS OF FOREVER" AND "THIEVES OF BAGHDAD"

According to "MovieWeb" Warner Bros. is preparing some interesting adventure movies for us.
HOLLYWOOD SPY has already mentioned the project which will portray Leonardo Da Vinci as an action hero. Now, the reports state that Warner Bros. 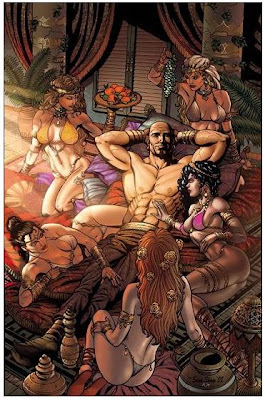 has hired Marc Guggenheim to write the script for "Leonardo Da Vinci and the Soldiers of Forever" which describes an alternative history in which Da Vinci is a member of a secret society who falls headlong into a supernatural adventure that pits the man against Biblical demons in a story involving secret codes, lost civilizations, hidden fortresses and fallen angels. The movie is scheduled for 2013.

After he finishes that script, Marc Guggenheim will also pen "Thieves of Baghdad" also for Warner Bros. In this epic adventure Sinbad, Ali Baba and all the greatest scoundrels from the classic Arabic folk tales team up to pull off the biggest heist of their criminal careers.
I must admit I can't wait to see the casting for both of these exciting projects.
Posted by DEZMOND at 9:42 PM