THE FIRST LOOK AT THE DESTROYER IN "THOR"

Latino Review has published the first exclusive image from Kenneth Branagh's movie adaptation of "Thor". The picture gives the first glimpse at The Destroyer. The Destroyer is an enchanted suit of armor forged by Odin, and was used by Thor's arch-foe Loki on several occasions when he was trying to kill Thor. The armor has the ability to project blasts of energy or heat, emit a disintegration beam activated via its visor, manipulate electro-magnetism and molecules and achieve flight. 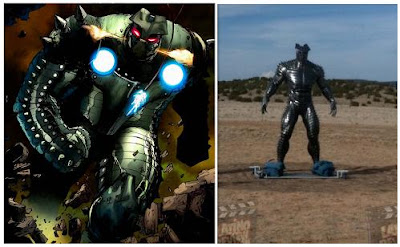 The movie itself will go from present day Earth to the realm of Asgard following The Mighty Thor (Chris Hemsworth), a powerful but arrogant warrior whose reckless actions reignite an ancient war. Thor is cast down to Earth and forced to live among humans as punishment. Once here, Thor learns what it takes to be a true hero when the most dangerous villain of his world sends the darkest forces of Asgard to invade Earth.
Posted by DEZMOND at 10:20 PM