Here's the first exclusive picture of Jeremy Irons as pope Borgia in the historical saga "The Borgias" which will amaze us on Showtime in 2011. As we've already written, this ten episode drama series will follow the infamous Italian Renaissance family the Borgias. 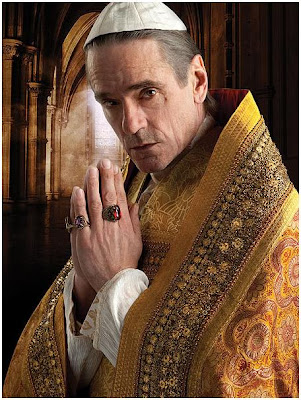 In the show produced by Neil Jordan and written by Michael Hirst ("The Tudors", "Elizabeth") Jeremy Irons will play Rodrigo Borgia, the cunning, manipulative patriarch of The Borgia family who ascends to the highest circles of power, Colm Feore will play his arch enemy Cardinal Giuliano Della Rovere, and we reported earlier this week that François Arnaud will play Cesare Borgia, Rodrigo's Machiavellian son, but we are yet to see who will play his son Juan, and his scandalously beautiful daughter, Lucrezia. "The Borgias" will be a complex, unvarnished portrait of one of history’s’ most intriguing and infamous dynastic families whose power and influence eventually lead them to their demise. Their motto was "politics have no relation to morals".
Being a huge fan of historical sagas, Michael Hirst, Showtime and "The Tudors" I can't wait for this show's premiere in 2011.
Posted by DEZMOND at 11:32 PM