Now this is what happens to celebrities who do not read HOLLYWOOD SPY. How many times have I told you people, 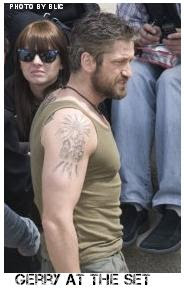 that when you come to Serbia you can't drink slivovitz (lethal Serbian plum brandy) like you'd drink whiskey, vodka or any other poisonous liquid.
According to Serbian press, Gerard Butler, who is currently filming "Coriolanus" in Belgrade, has been taken to a private clinic yesterday by producers and his security. After blood testing, doctors have diagnosed a high blood pressure, and Gerard was given an IV. According to doctors, the high blood pressure was the result of Gerard's excessive enjoyment in Serbian delicacies and domestic brandy which led to mild food and alcohol poisoning. 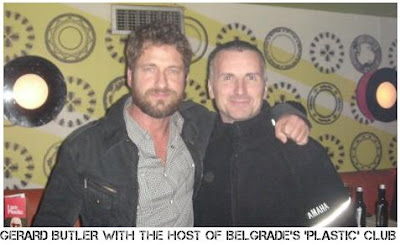 We don't have to mention that beside too much food and drink, Gerard has also exhausted his organism with too much work and too much partying, since Serbians have been seeing him in Belgrade clubs almost each night this week.
But at least the stories about Gerard being a great lad, have been proved again, since the clinic staff was more than impressed by his friendly attitude and positive character.
Posted by DEZMOND at 8:57 PM