JUSTIN THEROUX WOULD LIKE TO BE HAWKEYE IN "THE AVENGERS"

Actor Justin Theroux, who was hired to write the screenplay for "Iron Man 2" after he had impressed Robert Downey Jr with writing "Tropic Thunder", got busy these days promoting the super-hero sequel coming to cinemas on May 7th. Speaking to "Movieweb" Justin Theroux has revealed that he wouldn't mind continuing his work with Marvel Studios. 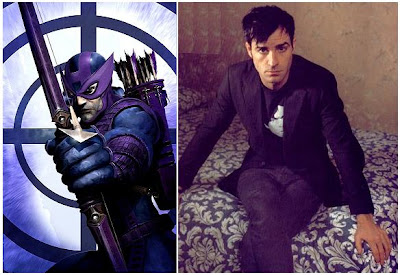 Since the studio is also focusing on their super-hero group movie "The Avengers" he said that he won't have time to write the script for that film, but that he could consider starring in it, and he mentioned a role he would be particularly interested in. Apparently he could see himself as Hawkeye. Hawkeye has no superhuman powers, but he is a trained athlete and tactician who is very skilled with the bow and arrows. What do you think, could you see Theroux as Hawkeye?
Posted by DEZMOND at 9:26 PM