Ah, will the casting for Joe Johnston's "The First Avenger: Captain America" ever be over? It seems that after both Emily Blunt and Keira Knightly have refused the lead female role in the movie beside Chris Evans and Hugo Weaving, the list of the actresses who could play Captain's girl Peggy Carter are now down to two names. 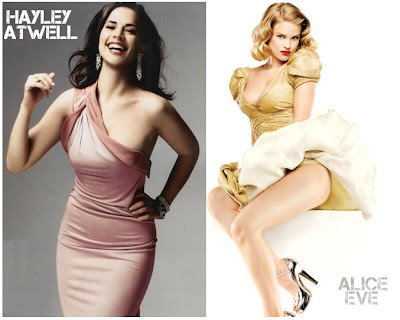 The first one is sexy Alice Eve ("She's Out of My League", "Sex and the City II") who is apparently the current front-runner, and the second one is Hayley Atwell ("Cassandra's Dream", "The Pillars of the Earth", "The Duchess"). They are both screen-testing for the second time for the coveted role tomorrow in London. I must admit I wish they would choose some more famous ladies for the role.
Posted by DEZMOND at 9:44 PM