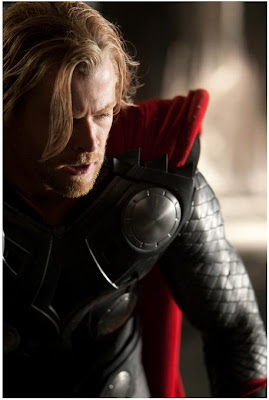 Check out charismatic Chris Hemsworth as the Norse God. Premiering May 6th, 2011 "Thor" stars Chris Hemsworth, Anthony Hopkins, Kat Dennings, Stellan Skarsgård, Ray Stevenson, Natalie Portman, Samuel L. Jackson and Jaimie Alexander.
What do you think? As far as I can see around the Net, the fans are getting hyped over the adaptation, and everybody likes the first pictures of The Destroyer and Chris Hemsworth as Thor. I'm not sure, but I think the studio has decided to quickly release this first picture of Thor in order to cover up yesterday's leaked picture of Destroyer.
Posted by DEZMOND at 9:06 PM