Now this was an unusual poll. Thanks to her devoted fans (who lead a voting campaign all over Twitter) Ellen Pompeo has won HOLLYWOOD SPY's Fire Angel poll with stunning 40% of your 299 votes. She left behind her Marcia Cross (20%), Bryce Dallas Howard (16%) and Christine Hendricks (9%).
With her icy beauty and fiery hair, Ellen Pompeo has become one of the most popular TV actresses thanks to her tender, fragile and ethereal appearance in ultra successful "Grey's Anatomy". Having in mind her lovely charisma and talent I'm not really sure why she hasn't been a more frequent guest in Hollywood movies ( we've seen her in not so many movies - "Moonlight Mile", "Catch Me If You Can"), she would be a great actress in romantic movies and dramas. I hope it's not a curse of some kind, since she appeared in "Daredevil" and "Eternal Sunshine of the Spotless Mind" but her roles were deleted from the final cuts in both movies. She truly is one of television's most mesmerizing fire angels! 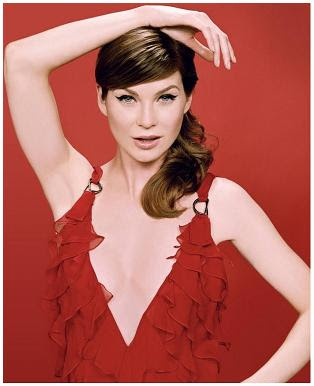 Since we've spent more than a month choosing your favourite blonds, brunettes and redheads in Hollywood, I think we should now do one poll with gents. The new poll starts now and in the next two weeks we will be choosing your favourite BRITISH LAD among some of the most talented British actors of younger generation. Pick your candidate and vote: dashing Henry Cavill ("The Tudors"), adorable Hugh Dancy ("King Arthur", "Evening"), elegant Simon Woods ("Rome", "Cranford"), captivating Matthew Goode ("Watchmen", "Leap Year"), profound Jamie Bell ("Tintin", "Eagle of the Ninth"), ultra talented Tom Hardy ("Star Trek Nemesis", "Bronson"), beloved James McAvoy ("Atonement", "Wanted", "Penelope"), or the lucid Cillian Murphy ("Sunshine", "The Wind That Shakes The Barley", "Breakfast on Pluto"). Vote for your favourite British lad!
Posted by DEZMOND at 10:24 PM