MICKEY ROURKE TO STAR IN "GENGHIS KHAN" BY JOHN MILIUS

The good news - we are getting a new epic, the bad news - Mickey Rourke will take the lead role. Talking to "Orlando Sentinel",he has revealed that he might play the fearsome Mongol leader in "Genghis Khan" a film written by John Milius. Here's what Rourke said:
I read his script and you know, the man is known for his tough writing. He wrote "Conan" and "Dirty Harry" and "Apocalypse Now", and it'll be interesting to see how he works behind the camera. I'm playing Genghis. John wrote it as a piece told from the son and grandson's point of view, how they saw this mythic figure from their family. You see him in flashbacks, back when he was in his mid-40s. 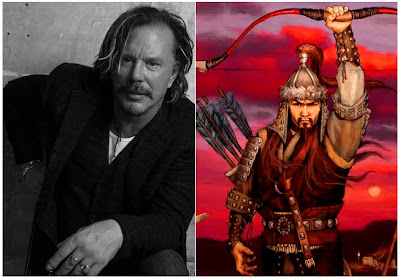 And back then, being in your mid-40s was being really old. It'll be a fascinating experience, maybe shooting in parts of India, they tell me, and China. I've never worked in either of those countries, so that'll be new. Historically, if you read about the guy, he was a mystery. There's a lot of myths surrounding him, but also some true stories. Milius went through that in prepping this, so he'll be a fascinating character to play.
It's interesting how out of a sudden, Rourke has gone all epic, since before doing the Genghis Khan, he will play a king in Tarsem's mythological epic "Immortals".
Posted by DEZMOND at 9:30 PM