CLASH OF THE MUSKETEERS!

We all know that Hollywood can sometimes act real crazy, but this time it seems the studios have lost their sense. We have already mentioned that two different projects on Musketeers are in preproduction. But now it seems we will witness the clash of the Musketeers. 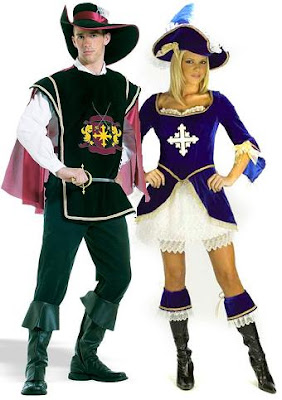 Both Warner Bros. and Summit Entertainment have decided to release their adaptations of the popular Alexander Dumas story in 2011. Warner Bros. has apparently offered director Doug Liman to helm their "The Three Musketeers" adventure. To heat up the war of the studios Paul W.S. Anderson will on the other side direct "The Three Musketeers" film for Summit Entertainment, and his project is planned as a 3D movie. Off course it is not unlikely that Doug Liman will shoot his film in 3D as well.
And we shall be a collateral damage in this clash, forced to watch too many movies about immature men leading sward battles with feathers on their hats and frilly lace around their collars.
Posted by DEZMOND at 7:06 PM