HOLLYWOOD SPY has written before about Sean Bean's new historical action "Black Death" coming to UK cinemas later this May, but now you can check out the trailer. 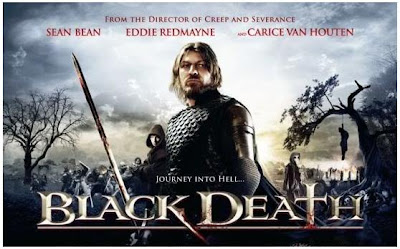 Here's the plot: Plague-ridden medieval England: Bodies lie scattered in their hundreds, the country is in turmoil. One hope remains, rumours of a village that is unaffected by the deadly disease. As Gods ambassador, young monk Osmund (Eddie Redmayne) is tasked in leading the fearsome knight Ulrich (Sean Bean) and his group of mercenaries to the remote village. Their quest is to hunt down a necromancer - someone able to bring the dead back to life. Their journey is treacherous and filled with danger, encountering deadly bandits and vicious witch-burnings that will put their faith to the ultimate test. Though its upon entering the village that their true horror begins... This is a brutal and terrifying epic that guarantees to chill the blood and stir the soul.