SUPERHERO SITCOM "NO HEROICS" WITH FREDDY PRINZE JR AT ABC!

Crazy British sitcom "No Heroics" about a group of B-list superheroes, who would rather get drunk and commiserate on their lack of superiority in their local superheroes-only pub, will go across the ocean straight to ABC. ABC has hired writer-producer Jeff Greenstein ("Will & Grace", "Desperate Housewives") to pen the pilot-episode for the American version. 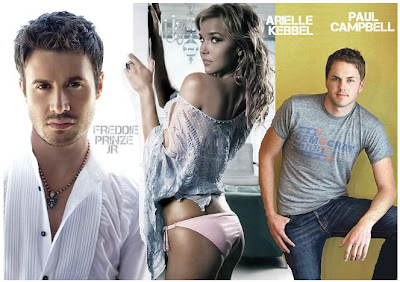 They've already found the main actors.Freddie Prinze Jr. will play the main role of Bradley, aka Ultimatum, who is actually a good guy and the world's most powerful super-hero, but who enjoys picking on B-Grade super-hero Chillout who will be played by Paul Campbell ("Battlestar Galactica"), a ridiculous superhero only capable of freezing small objects. Arielle Kebbel will be the group's sweetheart, while Eliza Coupe ("Scrubs", "Samantha Who") will play a bad girl that can turn invisible. 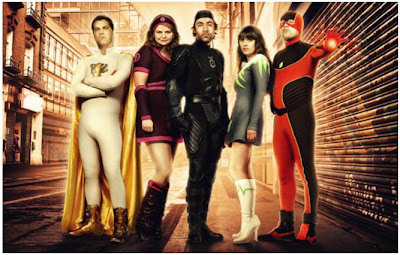 It's interesting that in the British version the leads are a man who can see 60 seconds into the future and loves hardcore pornography and drugs, a woman who can manipulate machines (for free smokes or cash), and a man who can summon fire, often with disastrous results. You can see the original British cast in the picture above :)
Posted by DEZMOND at 10:45 PM