The production of epic action movie "Thor" is under way and the director Kenneth Branagh has revealed some details about the way the movie is going to look in an interview for "The Los Angeles Times". Here's what he said about how they will present two different worlds - the old world of the Gods and the new urban world: 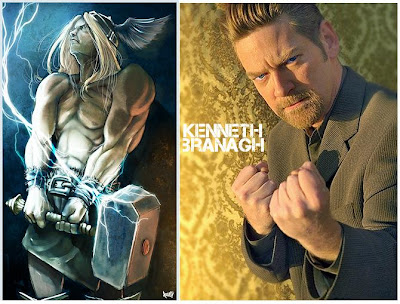 Inspired by the comic book world both pictorially and compositionally at once, we've tried to find a way to make a virtue and a celebration of the distinction between the worlds that exist in the film but absolutely make them live in the same world. It's about finding the framing style, the color palette, finding the texture and the amount of camera movement that helps celebrate and express the differences and the distinctions in those worlds. If it succeeds, it will mark this film as different.... The combination of the primitive and the sophisticated, the ancient and the modern, I think that potentially is the exciting fusion, the exciting tension in the film.
Known as visual master genius and an expert in deep characterization, Branagh will surely gives us a stunning movie. Starring Chris Hemsworth, Natalie Portman, Anthony Hopkins, Samuel L. Jackson, Stellan Skarsgård, Ray Stevenson, Jaimie Alexander, Idris Elba, Tom Hiddleston ... the movie is out May 6, 2011.
Posted by DEZMOND at 6:44 PM