I'm not quite sure whether Catherine Hardwicke thinks that love and monsters always go together, but as HOLLYWOOD SPY reported this week, the "Twilight" director's new project is "The Girl with the Red Riding Hood" a Gothic re-imagining of "Little Red Riding Hood" by the Brothers Grimm. The new version of the story in which a wolf disguises himself to fool a girl delivering food to her sick grandmother in the forest will follow earlier oral versions of the tale, which date back to the Middle Ages, and are far darker involving a werewolf rather than a wolf. 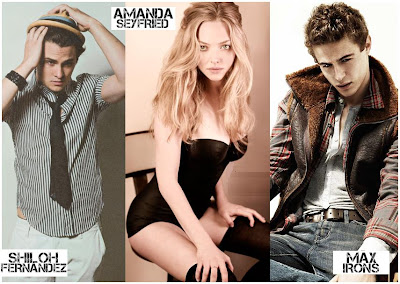 As we already reported blond angel Amanda Seyfriend will play the main role, but this week the cast of the movie became a lot bigger. Amanda will be the center of a romantic triangle between two young actors Max Irons and Shiloh Fernandez. Gary Oldman will portray Father Solomon, who is the Witchmaster General in charge of finding and killing the werewolf that has been stalking Amanda Seyfried's character, while legendary Julie Christie will probably play Seyfried's grandmother, who passes the time by knitting with silver needles.
Posted by DEZMOND at 10:01 PM