NETFLIX' THE HOUSE
ANIMATED ANTHOLOGY MOVIE
Three Visionary Tales. One Unforgettable Place. That is the tagline Netflix is using to promote its new animated stop motion anthology movie THE HOUSE which consists of three stories directed by different movie makers with the voice cast that includes Matthew Goode, Miranda Richardson and Helena Bonham Carter. Across different eras, a poor family, an anxious developer and a fed-up landlady become tied to the same mysterious house in this animated dark comedy. First story is set in the 1800s, impoverished Raymond meets a mysterious benefactor who promises to restore both him and his family to their former status. In chapter two, set in the present day, a harassed property developer tries to make a quick sale from a renovation. In chapter three, set in the near future, the house survives a hugely changed landscape. The movie will stream January 14th!
RIVERDANCE
THE ANIMATED ADVENTURE
This one is actually one of Sky's spring 2021 originals but will be streaming on Netflix January 14th as well. RIVERDANCE: THE ANIMATED ADVENTURE features voices from Pierce Brosnan, Brendan Gleeson and little Sam Hardy as an Irish boy named Keegan who, with a Spanish girl named Moya, journeys into the mythical world of the Megaloceros Giganteus (aka the Irish Elk, who are actually extinct) who teach them to appreciate Riverdance as a celebration of life. Inspired by the global stage sensation and with new music by Grammy winner Bill Whelan, this is an animated adventure of sight, sound and dance as you've never before experienced. Dave Rosenbaum both wrote and directed the heartwarming movie. Check out the fun trailer below:
Posted by DEZMOND at 1:00 PM 20 comments

SEE KRISTEN BELL AND TOM RILEY IN NETFLIX COMEDY SERIES PARODY THE WOMAN IN THE HOUSE ACROSS THE STREET FROM THE GIRL IN THE WINDOW!

GO ON AN ADVENTURE WITH DON QUIXOTES' GREAT GRANDSON IN QUIXOTES: THE HEIRS OF LA MANCHA ANIMATED MOVIE! TRAILER AND TEASER ARE HERE!

QUIXOTES ANIMATED MOVIE
THE HEIRS OF LA MANCHA
Something animated for you today coming from Studio 100 Film who have released official teaser for QUIXOTES: THE HEIRS OF LA MANCHA animated movie which will arrive at the end of the next year as a co production between Germany and Argentina.
Based on the Cervantes classic the story follows 11 year old Alfonso, the great great great grandson of the famous Don Quixote, and his three imaginary and musical rabbit friends. When his hometown is threatened by a powerful storm, caused by an evil corporation who wants to own the land, capable of destroying everything in its path, Alfonso is joined by Pancho (the great-great-great-grandson of Sancho Panza) and Victoria. Together they set out to save their beloved town of La Mancha and along the way Alfonso discovers the power of friendship and finds his first love.
Posted by DEZMOND at 1:00 PM 11 comments

FIRST OSCAR MOVIE TRAILER
ON THE 1ST DOCUMENTARY THAT WON AN ACADEMY AWARD
Story coming from Variety today is of Russian film FIRST OSCAR World War II drama inspired by the true story of the making of documentary “Moscow Strikes Back,” winner of an Oscar in 1943, the first year when documentaries had their own Academy Award. Out in March, it follows two student cinemato- graphers, Ilya Kopalin and Leonid Varlamov, who, as the Nazis approach Moscow, refuse to be evacuated and instead volunteer to be front-line cameramen capturing the horrors of war and bravery of the Soviet soldiers. The second storyline unfolds in the U.S. where one of the members of the Academy Awards selection committee tries to persuade his colleagues to launch a new category for Best Documentary at the upcoming Oscars event. Sergey Mokritskiy directs the film. Young Russian actors Tikhon Zhiznevskiy and Anton Momot play the lead roles with Michael Lerner,  Robert L. Wilson, Jordan Laesch also in the cast.
Posted by DEZMOND at 1:00 PM 14 comments

HOLLYWOOD SPY'S ULTIMATE GUIDE THROUGH ALL NEW EPIC, PERIOD SET AND HISTORICAL 2022 TV SERIES: FROM LORD OF THE RINGS AND VIKINGS, TO ROYAL COURTS, WILD WEST AND HISTORICAL VENUES 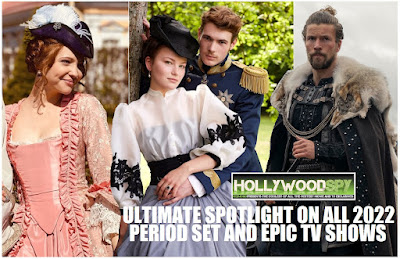 HILL OF VISION MOVIE
SENDS LAURA HADDOCK AND EDWARD HOLCROFT TO WW2
Now there's a gorgeous couple if there ever was one: Laura Haddock and Edward Holcroft have already shot HILL OF VISION movie from Roberto Faenza and it is due to arrive sometime next year set in Italy during WWII. After his mother is arrested by fascists, Mario (Lorenzo Ciamei) spends his childhood on the streets. In 1947 they are miraculously reunited and start a new life in America. Based on the life of Mario Capecchi, 2007 Nobel Prize in Medicine. The film title is the name of the Quaker community that welcomed Mario upon his arrival in the United States, playing a crucial role in his formation.
DEAD RECKONING SERIES
ON THE TITANIC AFTERMATH
As Deadline reports, Andrew Nunnely is going to turn Nicholas Barratt's The Lost Voices From Titanic into a DEAD RECKONING mini series, a thriller set amidst the aftermath of the sinking of the Titanic that combines horror and supernatural elements with a never before told true story revealing the truth of what really sunk down the ship, and the otherworldly, haunting details that defy explanation to this day. Characters will include historical figures, heads of state, titans of industry, from Churchill, JP Morgan, and HG Wells to the halls of Congress and the White House, as they play world chess with the Titanic… While survivors and victims, their stories untold until now, have their voices heard for the first time. Sreda Global is producing.
Posted by DEZMOND at 1:00 PM 12 comments

BEFANA COMES AT NIGHT 2
MONICA BELLUCCI AS A WITCH
Two non English movies for you today as Hollywood is in its prefestive slumber: a prequel to La Befana movie from 2018 BEFANA COMES AT NIGHT 2: THE ORIGINS will arrive to Italian cinemas a day before New Year's Eve. Monica Bellucci takes the lead role of Befana, an old woman who delivers gifts to children throughout Italy on Epiphany Eve (the night of January 5). Little Zoe Massenti plays Paola, an XVIII century street girl, scam always looking for trouble, who inadvertently finds herself hindering the plans of the terrible Baron De Michelis (Fabio De Luigi), a hunchback always escorted by the trusted and mistreated Marmotta (Herbert Ballerina), with a boundless thirst for power and a boundless hatred of witches. The intervention of the sweet and
powerful Dolores (Monica Bellucci), a good witch who dedicates her life to children, saves Paola from an already lit fire. Between a magical apprentice-  ship, pursuits, incredible transformations and many, many, troubles, Paola will discover that destiny has something very special in store for her.
DOVBUSH HISTORICAL EPIC
UKRAINE'S MOSTEXPENSIVE FILM
Meanwhile, over in Ukraine we have historical adventure arriving to cinemas next May. DOVBUSH is a large scale epic movie about a unique Ukrainian hero, who gave his life for the freedom of his people more than three centuries ago, but his history has become immortal.
The events of the film unfold in the Carpathians at the beginning of the 18th century. The brutal rule of the Polish gentry forces the Hutsuls to flee to the mountains. Two brothers, Oleksa (Sergei Strelnikov) and Ivan Dovbush (Aleksei Gnatkovsky), are outlawed. In search of revenge for the murder of their parents, the brothers become enemies to each other. One wants money, the other – justice. The Hutsuls start an uprising led by Oleksa. The gentry does everything possible to destroy Dovbush, but he manages to outwit them. Since then, the legend of the Carpathian knight has been living and inspires generations of those who are fighting for the freedom of their native land. More than 1000 costumes were made for the movie with more than 600 people taking part in the production with more than twenty historically accurate sets being made for the movie.
Posted by DEZMOND at 1:00 PM 4 comments

2022 ON HBO MAX
SEE IT ALL IN THEIR TRAILER
HBO Max has announced everything that is coming up to the streamer next year in a trailer highlighting their new TV shows and if you watch carefully you will see glimpses of some of historical, epic and fantasy shows as well. The trailer includes first clips from THE HOUSE OF THE DRAGON Game of Thrones epic series spin off, GILDED AGE 19th century New York set drama coming up January, and also first looks at the second season of RAISED BY WOLVES fantasy series and the fourth and the final season of WESTWORLD. You can also see first look of Sarah Lancashire as JULIA Child in new mini TV series on the legendary cook and also first scenes from THE STAIRCASE true story drama starring Colin Firth and Toni Collette. They also reveal first peek at THE NEVERS sf adventure series first season part two.
LIFE AFTER LIFE SERIES
FIRST LOOK COMING FROM BBC
Speaking of first looks, check out first two photos from Amazon and BBC One's four part series LIFE AFTER LIFE in which Thomasin McKenzie plays Ursula Todd, who is born to Sylvie and Hugh (Sian Clifford and James McArdle) one night in 1910, but dies before she draws her first breath. On that same night in 1910, Ursula is reborn and survives. Time and time again, living and dying in different circumstances, Ursula is reborn into a new, alternative iteration of life once more. This compelling story follows Ursula as she navigates each new life, through a critical era which spans two world wars, an encounter with Hitler and major life events. But what is it that Ursula so desperately needs to stay alive for? Can a perfect life ever be lived? Can the course of history ever be changed? Can Ursula save the world?
Posted by DEZMOND at 1:00 PM 18 comments