BARBARIANS EPIC TV SERIES
FIRST SEASON 2 PHOTO
A bunch of first photos from epic projects today, starting with the season two of BARBARIANS epic series which scored amazing success this year on Netflix and has just started shooting six new episodes over in Poland. Jeanne Goursaud, Laurence Rupp and David Schütter return as Arminius, Thusnelda and Folkwin who managed to kick Romans out of Germania. The second season will send them on a new adventure of love, friendship and betrayal. Joining in new roles are Daniel Donskoy, Murathan Muslu, Cynthia Micas, Katharina Heyer, Giovanni Carta and Alessandro Fella!
THE THREE MUSKETEERS
PATHE RELEASES FIRST PHOTO
With the start of the $85 million production, Pathe has released first photo from THE THREE MUSKETEERS an epic two part movie adaptation of Alexandre Dumas' famous story. The shoot will last till next May! The cast includes François Civil, Eva Green and Vincent Cassel as D’Artagnan, Milady and Athos. Eric Ruf is the Cardinal Richelieu, Vicky Krieps is queen Anne, Romain Duris is Aramis, Pio Marmaï is Porthos, Louis Garrel is King Louis XIII, Jacob Fortune-LLoyd sadly replaces Oliver Jackson Cohen as Duke of Buckingham, Patrick Mille, Lyna Khoudri and Ralph Amoussou also star. The shooting will cover Louvre Palace, the Castles of Fontainebleau and Saint-Germain-en-Laye, Fort la Latte and Chantilly, as well as the citadel of Saint-Malo.
HOUSE OF PROMISES
NEW SERIES FROM BETA FILM
Our favourite Beta Film has announced new period set 12 part drama HOUSE OF PROMISES set in the 1920's Germany and following young Vicky (Naemi Feitisch) who arrives from the provinces to a glamorous Berlin, in the vanguard of European modernity, though marked by great 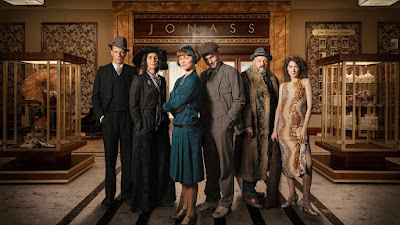 poverty. She scores a dream job as a saleswoman in the newly opened Jonass department store. At a dance bar she falls in love with the seemingly penniless pianist Harry (Ludwig Simon), who turns out to be the son of the department store owner Arthur Grünberg (Alexander Scheer). And so begins an impossible love across the class divide that nevertheless – or precisely because of it – outlasts time! It will air on RTL and NOWTV streamer.
Posted by DEZMOND at 1:00 PM