NETFLIX' THE EMPRESS SERIES
UNVEILS FIRST SET PHOTOS
Beside TVNOW's Sisi series and Corsage movie with Vicky Krieps, I told you that we will also be getting a third project on famous Austrian empress Sisi as Netflix is shooting six part series THE EMPRESS as one of their new German originals and today I have first photos for you from the production that started earlier this month. The series will depict Sisi’s life from her teenage years onwards, when she first met Emperor Franz Joseph of Austria Hungary, and Devrim Lingnau and Philip Froissant will play the imperial couple. When the rebellious Elisabeth meets Franz, the Emperor of Austria, in 1853 the young couple's intoxicating love 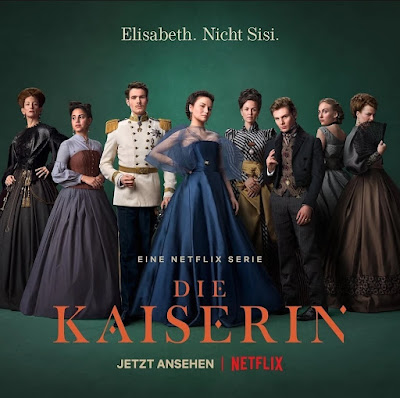 completely upsets the power structure at the Viennese court. After the wedding, the young empress must assert herself not only against her mother in law, the sovereign, power hungry Sophie, but also against Franz's brother Maxi, who himself longs for the throne (and for Sisi). As enemy troops form

up on the borders of the Habsburg Empire, people in Vienna rise up in protest against the emperor. Elisabeth must find out who she can trust and how high
the price is to be a true empress and a figure of hope for the people. While her contemporaries considered her kitschy and vain, Sisi got a whole cult of fans

after she was stabbed to death in Geneva in 1898. Kinda like today's rock stars. You can read our main spotlight on the series with tons of photos HERE.
TVNOW'S SISI SERIES
NEW PHOTOS FROM THE SETS
Meanwhile, check out two new photos from the rival series to the Netflix' one, which will also have six episodes but will air first as The Empress above is scheduled for next spring and SISI for the end of the year. The lead cast includes Dominique Devenport as Sisi, and Jannik Schümann as emperor Franz.The series, which will air on ORF in Austria, RTL's streamer TVNOW in Germany and TF1 in France and is produced by Beta Film, will also star Désirée Nosbusch as Archduchess Sophie, Franz's mother,  Tanja Schleiff as Countess Esterhazy, Paula Kober as Fanny, Julia Stemberger as Sisi's mother, Duchess Ludovika, and Giovanni Funiati as Count Andrassy.
Posted by DEZMOND at 1:00 PM