THE GILDED AGE SERIES
TRAILER & AIRTIME REVEALED
HBO and Sky have unveiled the trailer and airing time for new Julian Fellowes period set series THE GILDED AGE which will arrive to Sky January 25th and to HBO a day before. Fellowes has both written and produced the opulent nine part series. 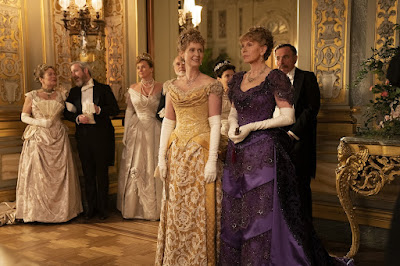 THE GILDED AGE IN THE 1880S
New York City was a period of immense social upheaval, of huge fortunes made and lost, and of palaces that spanned the length of Fifth Avenue. In the series, Marian Brook (Louisa Jacobson) is the wide-eyed young scion of a conservative family who will embark on infiltrating the wealthy neighboring family dominated by ruthless railroad tycoon George Russell (Morgan Spector), his rakish and available son Larry, and his ambitious wife Bertha (Carrie Coon), whose "new money" is a barrier to acceptance by the Astor and Vanderbilt set. Marian is about to experience a whole new world springing up right outside her front door. Christine Baranski and Cynthia Nixon are Marian's wealthy aunts, with Taissa Farmiga, Nathan Lane, Blake Ritson, Simon Jones, Harry Richardson, Thomas Cocquerel, Jack Gilpin also in the massive cast.
BILLY THE KID SERIES
FIRST LOOK FROM EPIX
Epix has released first teaser and photos revealing Tom Blyth as BILLY THE KID in the new historical series coming from Tudors and Vikings creator Michael Hirst. He, coincidentally, also stars in the above mentioned Gilded Age. The eight episode series is an epic romantic adventure based on the life of famous American outlaw Billy the Kid, also known as William H. Bonney — from his humble Irish roots, to his early days as a cowboy and gunslinger in the American frontier, to his pivotal role in the Lincoln County War and beyond. Daniel Webber plays Jesse Evans, another famous outlaw and leader of the Seven Rivers Gang. When they meet, Jesse has already embraced a life of crime: robbing stores and cattle rustling. Billy is attracted to his wild and reckless character and becomes Billy’s doppelganger of sorts — his shadow self, forever inviting him over to the dark side of life.
Posted by DEZMOND at 1:00 PM

I was almost going to pass when you said Cynthia Nixon, but I admit that the trailer reeled me in. I'll have to see if I can overlook that wretched woman's presence in the mini series.

I don't like her nor Baranski and the fact that Meryl Streep has put her daughter to play the lead role pisses me off indescribably as you know how much I despise nepotism in Hollywood or anywhere, but I will watch it for Cockerell and Harry Richardson :)

I'm so, so looking forward to The Gilded Years. I've been waiting for years, but I'm terrified of being dissappointed which I usually am.

It will be nice looking forward to something in the cold days of January, but I wouldn't raise my hopes up as you know how disappointing Fellowes has been lately. Belgravia was utter garbage, but then again I did kinda like The English Game, so who knows. I do have a feeling that after a very long dry period they will start bombarding us with new epic dramas in the first months: Around the world in 80 Days, Last Kingdom, Gilded Age, Valhalla, Being Elizabeth... I bet it will all come at the same time.

I didn’t like The English Game but then I’m not into soccer. Belgravia’s problem was that the book, an attempt to imitate Dickens, was dull. My fear is that Fellowes will have to bow down to HBO’s trademarks: superfluous and obscene sex scenes, and political correction. I don’t mind the inclusion of black characters. In fact, it is what I look forward to. Apparently, it’s the best storyline ad fits in the milieu like a glove.
According to PBS page, Around the World begins on January 2, All Creatures Great abd Small (2 season) on the ninth and then HBo brings TGA at the end of the month. But the big shower of period pieces comes this spring. Peaky Blinders finale, Second Season of Bridgerton and Sanditon, Leonardo in CW. Maybe they’ll toss Becoming Elizabeth and Valhalla into that basket.

I couldn't hear anything from the Billy the Kid, which normally is OK because I can see.. but I couldn't even see!! The whole thing is in the dark.

I don't watch Peaky and I already watched Leonardo (it was nothing special) and I'm not sure I will watch Sandi, if I do it will only be for my boo Weston Jones. All Creatures has finished a few weeks ago in UK and is starting tonight in Serbia actually on that Epic Drama channel :)

It is just a long tease scene him trying to look cool while entering a saloon, nothing exciting LOL

It will be a nine episode series!

I grew to hate Peaky, but since it's the last season..I will watch Sandi. I was afraid Leonardo was nothing special as you just said.

It was certainly watchable, some episodes were even nice, but Freddie Highmore is the worst actor I have ever seen and literally ruins every scene he is in with his absolute and utter lack of any talent and idea what to do with himself when in front of the camera. Aidan was OK, nothing special, he did try not to be Poldark and sometimes he even succeeded in it, but the show really did not need the female character and the crime element, it would have been great if it just focused on his work in each episode. I had a feeling that it wasn't a passion project to any of them so I hope that the upcoming shows on the other two painters will be better.

What you say reminds me of The Name of the Rose, another Rai Fiction soulless series. And then you have RTVE that has totally decayed in this century, involved in this effort. Add Sony and then you don’t know what the hell they are trying to do. I miss old Rai Fiction, sadly its spirit left with Berlusconi

Name of the Rose was terrible, I survived only two episodes and needed therapy after the borefest LOL

I wonder what is that cutie pie Damian Hardung doing these days, he was ever so sweet in it.