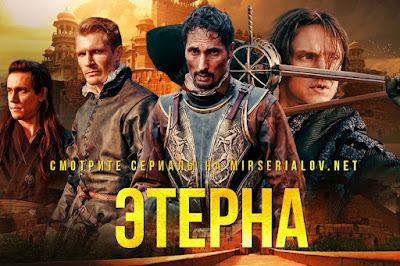 AETERNA EPIC TV SERIES
COMING FROM RUSSIA
You are sure in for a massive treat today with the utterly mind blowing teaser and out of this world gorgeous pictures from upcoming new Russian TV series AETERNA (Этерна) an epic fantasy adventure which will arrive to online cinema of Kinopoisk, Russia's leading movie website, during the January holidays. The project is based on the series of novels from Vera Kamshi Reflections of Aeterna which was first published back in 2004 and has 16 novels and 3 prequels. The cast is led by our favourite Russian blond god Kiril Zaytsev alongside Yuriy Chursin, Andrey Smolyakov, Pavel Kraynov, Denis Nurulin, Fedor Misheyev and Ekaterina Volkova! The plan is for the series to have five ten episodeseasons with the second season arriving at the beginning of 2023. It took two years for the producers of the series Evgeny Baranov and Evgeny Rene to persuade Vera Kamshi to give them permission to adapt her work for the small screens. It then took more than three years to do the adaptation of the book series into the television series format, to develop main storylines, to create the world and the sets and prepare it all for visualization. The producers have dedicated special care to the creation of countless costumes, armors, to choreographing fencing scenes and battles - which all needed to look plausible. Dozens of actors, professional riders and stuntmen participate in staged battles. Weapons for filming were made by a professional gunman. All this to bring you beloved literary heroes, large scale battles and dramatic duels, palace and love intrigues, stunning costumes and unique charm of historical saga, to the small screens these holidays!
THE STORY OF AETERNA
The planet Cartiana, on which the plot develops, is one of the worlds of the Multiverse, where other worlds are connected in a mystical way. The scientific development of Cartiana correlates with the political and technological development of Europe in the 16th and 17th centuries, with elements of mysticism and magic. The world of Cartiana has a connection with other planets of the Multiverse, including our Earth and is on the verge of the Break of the Ages which happens every 400 years and is dangerous. Busy with their wars and intrigues, people have forgotten the covenants left to them by the Gods of the past, and are not able to realize that the catastrophe is very

close. Duke Richard of Oakdell, Lord of the Rocks and son of a dead rebel, enters Laik's squire school. His goal is to return the former glory to his ancient family and avenge his father. On the other side of the world, in the sacred city of Agaris, the Lightning Lord Robert Epine helps the king in exile, Aldo

Rakan, regain the throne of his ancestors ... See the exciting and visually stunning trailer below and tell us what you think, do you like it?
Posted by DEZMOND at 1:00 PM