WHEEL OF TIME SERIES
THE WHEEL WEAVES AS THE WHEEL WILLS
Believe it or not it is already November tomorrow (I have no idea what so freaking ever where did this sad year go) and it brings us a couple of new fantasy series, among them the long awaited small screen adaptation of Robert Jordan's popular high fantasy saga THE WHEEL OF TIME which he wrote in fourteen books, a task that took him about two decades of his life. Now his work is arriving to Amazon Prime on November 19th in a form of an eight episode fantasy drama. First three episodes will air then with the remaining five airing weekly after that all the way till Christmas. As you already know the series has been renewed for a second season as well earlier this spring and I have recently announced some of the new cast members that will join the series soon. Rafe Judkins, serving as the showrunner, said that the first season will cover first three books.
THE WHEEL OF TIME
is set in a sprawling, epic world where magic exists and only certain women are allowed to access it. It follows Rand al'Thor (Josha Stradowski), who leads a small and humble life in a small town called the Two Rivers. There is danger lurking, however, in the potential attacks from the Dark One, an evil entity that wants to destroy everything. A sorceress, and a member of the incredibly powerful, all female organization called the Aes Sedai, by the name of Moiraine (Rosamund Pike) takes Rand and his friends away from their home, as she believes one of them might be the reincarnation of the Dragon, an ancient hero who is prophesied to either save or destroy the world. Together, they embark on a dangerous, world spanning journey! 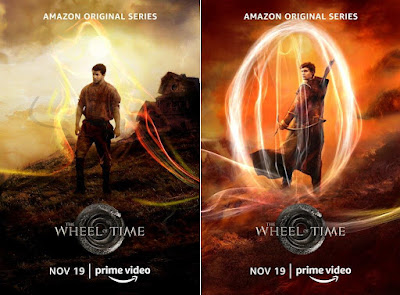 WHO ELSE IS IN THE CAST?
Beside Rosamund Pike and Josha Stradowski in lead roles, the cast of the series also includes Daniel Henney as al’Lan Mandragoran, Madeleine Madden as mayor's daughter Egwene al’Vere, Marcus Rutherford as blacksmith's apprentice Perrin Aybara, Barney Harris as Mat Cauthon, Zoë Robins as Nynaeve al’Meara, and among better known names in the cast are Maria Doyle Kennedy as Illa, and Sophie Okonedo as Amyrlin Seat Siuan Sanche!
Posted by DEZMOND at 1:00 PM

That sounds interesting. This is the first I'm hearing about it.

I am not a fan of fantasy, but the trailer isn't too bad.

Then you are busted, Mary :) as I've been writing about it for years now LOL

Hope it won't look too trashy like some of the masks in Witcher.

I was looking forward to see one, but the trailer doesn't look promising. I hate when shows are in the dark and I have to squint the other time. The trailer has a lot of darkness in it too!

That is the bane of our modern existence, almost all films and shows are shot in utter fecking darkness. I cannot stand it either and I often wonder how mindboggingly daft does one have to be to waste millions or hundreds of millions of bucks and then make nothing visible in the film.

I don't think the trailer looked too bad. I mean, I'll probably watch this one instead of reading the books for a change, but I do agree that the darkness through most of it wasn't very pleasing.

It would take a lot of time to read all 14 books LOL I often wonder what are the sales for such big sagas. When we do trilogies, the third one sells worst always and nobody even wants to publish anything longer than that.