THE MUTE MAN OF SARDINIA
1ST PICS FROM ITALIAN MOVIE
In period set movie department today we have first poster and photos from Italian historical drama THE MUTE MAN OF SARDINIA (Il Muto di Gallura) from Matteo Fresi, a sophisticated western set in Sardinia in 1850 which explores an historic family feud and is currently competing over at the 39th Torino Film Festival starring Romulus' star Andrea Arcangeli. In the true life story about the feud between the Vasa and Mamia families, which caused the deaths of more than 70 people in mid-19th century Sardinia, he plays deaf and mute Bastiano Tansu, who – mistreated and marginalized all his life – turned into a feared assassin, driven into a killing frenzy following his brother’s murder. Back in 1884 Enrico Costa wrote a book about this story famous in its region but not so much in the rest of Italy. 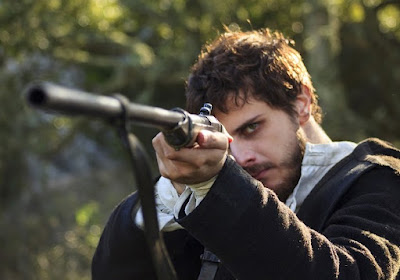 1883 SERIES TRAILER
WITH TIM MCGRAW & faith hill
Paramount TV has released first longer trailer for their new series 1883 which arrives to the small screens December 19th! The prequel to Yelllowstone, starring Tim McGraw and his real life wife Faith Hill, follows the Dutton family who embarks on a journey west of the Great Plains to the last untouched fort of America. This is a clear indication of western expansion and the promised land of America. A thorough study of a family fleeing poverty to seek a better future in Montana! Billy Bob Thornton also stars as a marshall. Taylor Sheridan created series will air in ten episodes this winter.
Posted by DEZMOND at 1:00 PM

This one is really for my husband. I am sure he want to watch it in one sunday morning.

Hope you get it one day in Turkey.

Not big on historic drama though, but THE MUTE MAN OF SARDINIA seems like an interesting one and worth a try.

Dez, for some reason the new blogger interface doesn't allow me to a header image that is as wide as the blog itself. I wanted to replace my old header image with the X-mas one I always show, but there's no way to do it, or so it self. Any advice?

I like the costumes them men are wearing, they remind me of what we wore here back in those centuries, very similar.

Blogger has made designing utterly impossible and difficult, even the switch of background image is now a painfully painful pain in the painful arse. I haven't tried changing the head banner in years and I'm very much afraid of it LOL Last time I tried to change the background and put an Autumn one, freakin' blogger erased all my design settings and I had to set everything from the scratch again and it was the worst nightmare ever, still gives me sleepless nights filled with darkness and gloom.
The only thing you could do is ad a gadget field under the regular banner and put the photo there using HTML codes and image uploading sites like I do with my scroll/roll beneath the header.

I have heard great things about Yellowstone. In fact, my mom hung up on me last night to watch it. I'd have to watch that series first before attempting this one.

Yes, Yellowstone and Succession seem to be big hits among your countrymen.

Jason and I started watching Yellowstone about 2 weeks ago. At first I wasn't sure if I liked it much, but I absolutely love it now that I'm getting deeper into it. I'm even more excited now to watch Tim and Faith and learn more about the Dutton family from the early days of the ranch.

Hope you will like the historical version as well!