SAS: ROGUE HEROES
1ST PHOTOS FROM BBC SERIES
BBC has unveiled first photos from their upcoming new period set series SAS: ROGUE HEROES revealing Connor Swindells, Jack O'Connell, Alfie Allen, in uniforms alongside Dominic West and Sofia Boutella. Coming from Steven Knight, the six part drama will arrive to British national broadcaster sometime next year. Filmed on location in the UK and Morocco, it is the dramatised account of how the world’s greatest Special Forces unit, the SAS, was formed under extraordinary circumstances in the darkest days of World War Two. 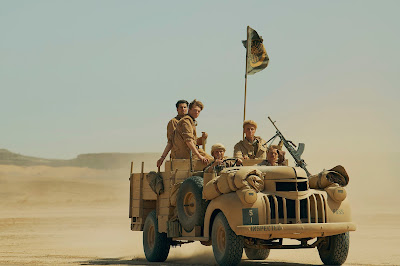 SAS: ROGUE HEROES SERIES
Rich with action and set-pieces, SAS: Rogue Heroes is the exhilarating story of renegade men taking monumental risks in extraordinary circumstances. Cairo, 1941. David Stirling (Connor Swindells) - an eccentric young officer, hospitalised after a training exercise went wrong - is bored. Convinced that traditional commando units don’t work, he creates a radical plan that flies in the face of all accepted rules of modern warfare. He fights for permission to recruit the toughest, boldest and brightest soldiers for a small undercover unit that will create mayhem behind enemy lines. More rebels than soldiers, Stirling’s team are every bit as complicated, flawed and reckless as they are astonishingly brave and heroic.
THE HISTORY OF SOUND
SENDS JOSH O'CONNOR AND PAUL MESCAL TO WW1
Speaking of war, Deadline reports that Josh O'Connor and Paul Mescal will lead WW1 gay romance THE HISTORY OF SOUND about Lionel (Mescal) and David (O’Connor), who, during World War I set out to record the lives, voices and music of their American countrymen. In this snatched, short-lived moment in their young lives, and while discovering the epic sweep of the U.S., both men are deeply changed.
Posted by DEZMOND at 1:00 PM