Now, this news will make Stephen King's fans happy, and I know there are quite a lot of them among our beloved readers. According to "Variety" Akiva Goldsman's "Weed Road" and Brian Grazer and Ron Howard's "Imagine Entertainment" are planning to buy the rights for the adaptation of Stephen King's "The Dark Tower" fantasy series consisting of seven books. 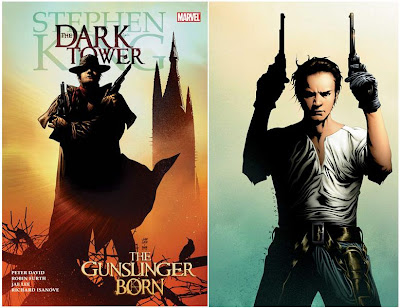 "The Dark Tower" is set in alternate world resembling the Old West and focuses on the last member of an ancient order of gunslingers and his quest toward a tower that's also the center of all universes.
This mix of fantasy fiction, science fantasy, horror and western has also been turned into a comic series by Marvel. Apparently the plan is to condense the seven book story into a trilogy on film, with Ron Howard in the director's seat.
Posted by DEZMOND at 9:29 PM