It's official - Tarsem Singh's Greek mythology epic has changed its name from "War of the Gods" to less attractive but more original "Immortals". The tale of the young warrior Theseus, 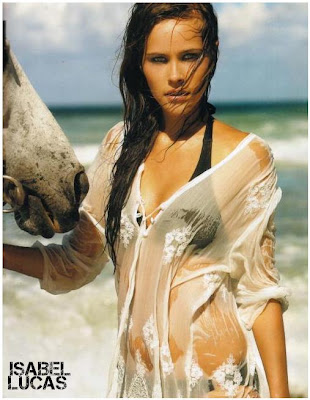 who leads his men into battle with the immortal Greek gods to defeat evil and the powerful elder gods of the Titans in order to save mankind has also received two new cast members. Movie legend John Hurt and young beauty Isabel Lucas ("Transformers", "Daybreakers") have joined Henry Cavill, Stephen Dorff, Kellan Lutz, Freida Pinto and Mickey Rourke in the movie which begun shooting few days ago in Montreal.
John Hurt will play the earthly manifestation of the god Zeus, who acts as a mentor and teacher to the young warrior Theseus (Henry Cavill) while Isabel Lucas will be Athena, the daughter of Zeus who finds her loyalty tested as the war between the gods and Titans looms.
Posted by DEZMOND at 9:15 PM