SAM CLAFLIN AND ASTRID BERGES FRISBEY IN "PIRATES OF THE CARIBBEAN: ON STRANGER TIDES"

So if like me, you aren't a fan of Penelope Cruz, than beside crazy Johnny Depp, you will at least have some lovely new faces to look at in Disney's sequel "Pirates of the Caribbean: On Stranger Tides". Producer Jerry Bruckheimer and director Rob Marshall have selected young Sam Claflin to star in the key role of Philip, a youthful missionary. 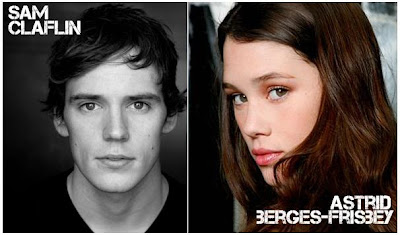 Britain's own Sam Claflin has graduated at The London Academy of Music and Dramatic Art and you will be seeing him in the historical mini-series "The Pillars of the Earth" over at Starz this summer. Beside him, another new member of the "Pirates" cast is French actress Astrid Berges-Frisbey in the role of Syrena. Her character in "Pirates of the Caribbean: On Stranger Tides" will actually be a mermaid, which sounds very interesting.
To read more about Sam Claflin and see more of his lovely pic, visit HOLLYWOOD SPY's spotlight on him!
Posted by DEZMOND at 6:39 PM