HILARIOUS PUSS IN BOOTS VIDEO FROM "SHREK FOREVER AFTER"

Now, ya people know how I don't give a shrek about "Shrek" movies, 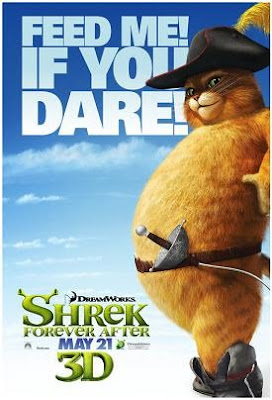 but at least they say that the Ogre will be gone "Forever After" when this sequel ends, so let's just take a look at my favourite character in the upcoming movie, the Puss in Boots, off course :) I nearly burst out laughing watching the adorable kitty in this short video from "Shrek Forever After". Check it out. As you know Antonio Banderas is the voice behind Puss in Boots who is having some weight issues in the final sequel which comes to cinemas on May 21st. Enjoy :))