"HERE, THERE BE DRAGONS" AND "THE SEARCH FOR THE RED DRAGON" TO BE ADAPTED INTO A MOVIE

According to "MovieWeb" another epic adventure awaits us in the future. The first two books "Here, There Be Dragons" and "The Search for the Red Dragon" in James A. Owen's fantasy series "The Chronicles of the Imaginarium Geographica" 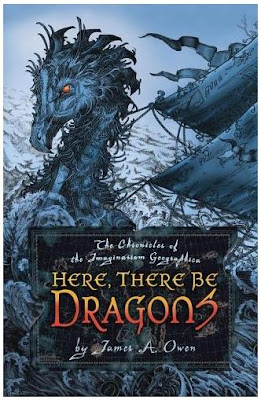 will be adapted for the big screen. Rick Porras who worked on "The Lord of the Rings: Fellowship of the Ring" will be a producer for Warner Bros. with the premiere set for 2011.
"The Chronicles of the Imaginarium Geographica" consists of four tomes set around a very secret book that has the unpublished maps and journals of history's most famous author-adventurers. The protagonists in the story are a young J.R.R. Tolkien and C.S. Lewis, themselves future giants of the fantasy-adventure genre whose famous works are imagined by Owen to have inspired these fictional adventures.
Posted by DEZMOND at 9:05 PM