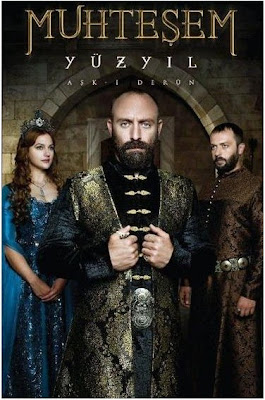 It is officially one of the most watched television series worldwide ever and yet if you live somewhere in the west you probably haven't even heard about it. But this is why you have your trusted HOLLYWOOD SPY to light up the mysteries in your life :) and introduce you to new things: MAGNIFICENT CENTURY (or MUHTUSEM YUZYIL in original) is exquisitely lavish and extremely dynamic historical series coming from Turkey! Viewed by hundreds of millions of people in Arabic countries, Asia, in Africa and at the Balkans, the show follows the life of sultan Suleiman from the 16th century Turkey, his sultanas, kids, all set in the 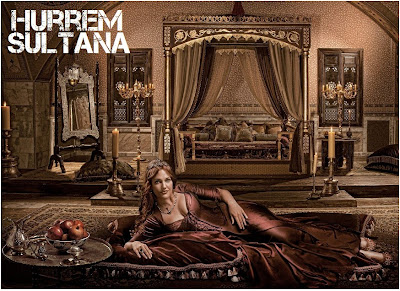 exotic and luxurious world of Istanbul palaces and harems! It is a sweeping saga, produced so far in gigantic 103 episodes - each lasting for more than hour and a half (in some countries they cut the 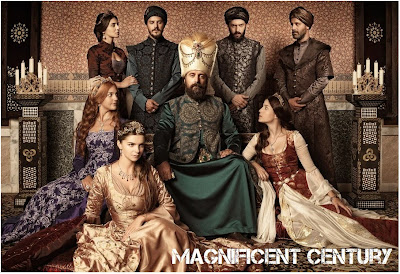 show into hour long daily episodes). Today's spotlight will contain spoilers, so if you're planning to Torrent the show be warned :)


THE MAGNIFICENT STORY
LOVE OF THE CENTURY
Set in the 16th century, the story follows the magnificent ascend to the power of the Ottoman sultan Suleiman whose empire was more extensive than the legendary one of 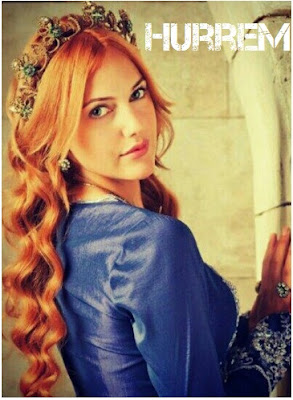 Alexander the Great. He ruled Europe, Asia and Africa, ascending to the throne in the Topkapi Palace when he was only twenty six years old. His reign, known as the lawgiving era in Turkey, will last for amazing 46 years. While he was still ruling the province of Manisa as the prince, he found his concubine sultana Mahidevran and got his first son prince Mustafa. After taking over the throne and becoming the sultan, Suleiman will fall in love with a harem girl Alexandra who will later on become sultana Hurrem giving him four princes and one 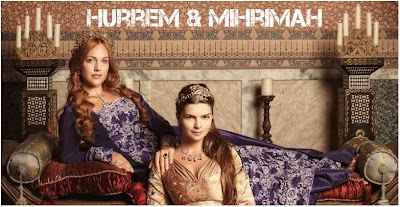 princess. While Suleiman fights with the Persian state in the East and the Roman Empire in the West, all of them aiming to conquer the world, Hurrem Sultan struggles with all obstacles in her way trying to make 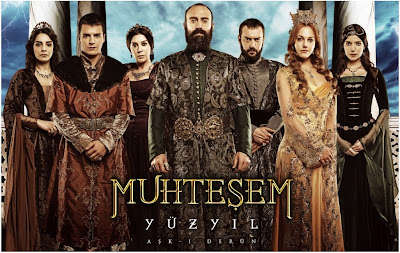 her status permanent in the Ottoman dynasty. While he fights with swords, soldiers and ships, Hurrem has to use her wit in order to beat all the inner enemies from his own family who want her removed from the palace. 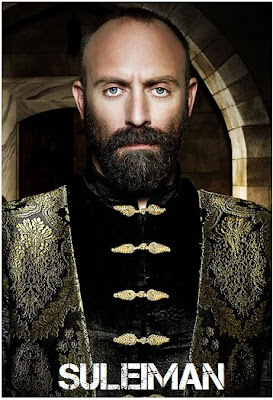 Turkish superstar Halit Ergenc plays Suleiman the Magnificent, the most powerful ruler of the Ottoman Empire, renowned for his legendary love for Hurrem Sultan, as well as the laws he implemented. During his lengthy 46 years of reign he confronted the Habsburg dynasty over the rule of Hungary, and he extended the dominion he had gained in the Mediterranean and annexed the Iraqi district from the Persians into the Ottoman rule. 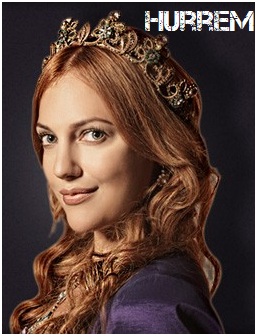 Played by breathtakingly gorgeous and charmingly talented Meryem Uzerli we first meet Hurrem as a slave from Ukraine whose family was killed and she was then taken to the harem in the Ottoman Palace. Making an impression on Suleiman with her wit and beauty, her power increases by giving birth to multiple crown princes thus upgrading her status to “Haseki Sultan”- son-bearing favorite concubine. She will be the first one who will get a status of a free woman from Suleiman and will even become his official married wife (something that hasn't happened before in history). Hurrem Sultan 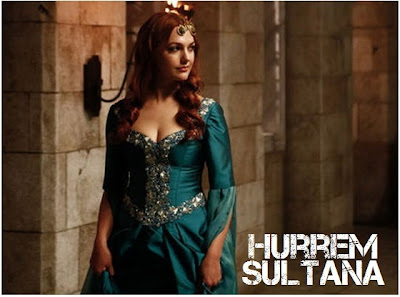 is renowned in history as the initializer of the era known as “Women’s Reign” during which the influential women of the Harem shared the power of governance. 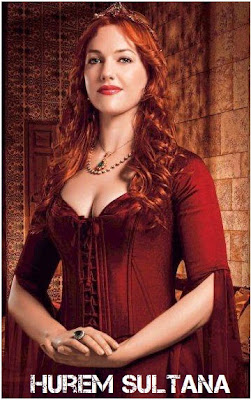 Hurrem's biggest enemies will be other ladies from Suleiman's family, from his first wife to his mother and his sisters, who were jealous of her power over the sultan, but throughout the show she manages to beat them all in numerous mindblowing twists, intriguing plots and dramatic scenes.  Her love for the sultan will overcome all dangerous obstacles, all death threats, all assassinations, kidnappings, even all the sultan's later mistresses, and Suleiman will always go back to Hurrem sultan provoking the wrath in their enemies. She will also build hospitals and sarays for poor women and kids, for beggars and ill people. 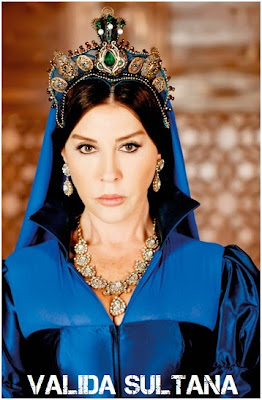 Suleiman's mother (Valide means mother), played by Nebahat Cehre, was the last royal Turkish woman of the harem, since all following sultanas will rise up from the slave status, while Valide was the daughter of the Khan of Crimea.  In the beginning she was Hurrem's biggest enemy and she even tried to kill her a couple of times, but before her death she will realise the true love that Hurrem has for the sultan and after that Hurrem will take over the harem ruling it for decades to come.

HATIJE SULTANA
Played by Selma Ergec, she was Suleiman's favourite sister, who was married of to his best friend Grand Vizier Ibrahim with whom she will share deep love although he will later on cheat on her with a slave girl from harem. At the beginning she is an ally to Hurrem, but later on she will become her biggest enemy, falsely believing that it was Hurrem who ordered the killing of Ibrahim and not Suleiman. She will go crazy after Ibrahim's death. As all of Hurrem's enemies, Hatice Sultan will also die, committing suicide in shame and in fear of Suleiman's wrath when it is discovered that she was responsible for kidnapping Hurrem Sultan and keeping her secretly imprisoned for years in the third season. 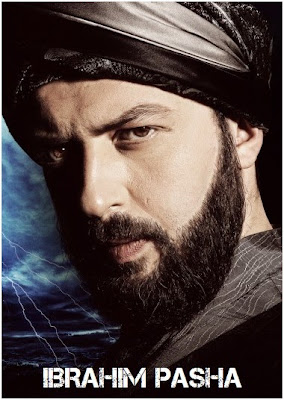 Suleiman's best friend, brother in law and his Grand Vizier is played by Okan Yalabik. At first he followed the sultan everywhere as his closest advisor and confidante, but later on the marriage to Hatice Sultana will make him overly arrogant, and combined with his hatred towards Hurrem Sultana (whom he wanted to remove from the harem) this will all lead to his humiliating death - Suleiman will order his death and he will be slain in a room next to sultan's. Another proof that you really shouldn't mess with Hurrem sultana :) 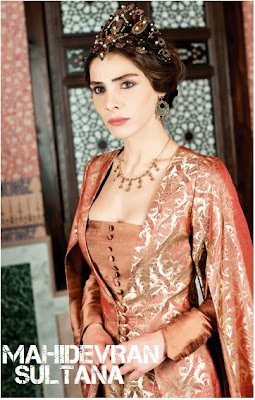 Sultan's favourite concubine before Hurrem arrives is played by Nur Fettahoglu. She gave birth to Suleiman's first son prince Mustafa, but her hatred towards Hurrem and many devious plots against Hurrem's life, together with the bad influence she had on Mustafa, whom she tried to convince that he should kill all of his brothers if he gets to the throne, will lead to her tragic destiny: she will be forced to live in poverty after her son Mustafa is slain for treason and plotting against his father the sultan. She never really learnt not to mess with much smarter Hurrem sultana. 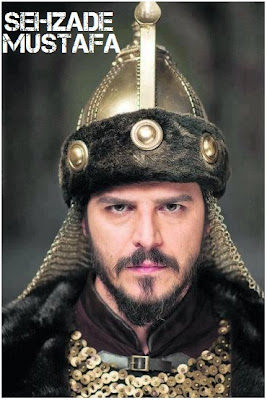 Suleiman's oldest son, and for a long time a crown prince, Sehzade Mustafa is played by Mehmet Gunsur. After growing up in Topkapi prince and being raised as the heir to the throne, he was sent to Manisa province to hone his ruling skills as the head of the district, but due to his stubbornest, his mother's numerous mistakes, and Hurrem sultana's intrigues (done to protect her own sons from Mahidevran sultana), he ends up killed by his father's orders when he threatens to overtake the throne. 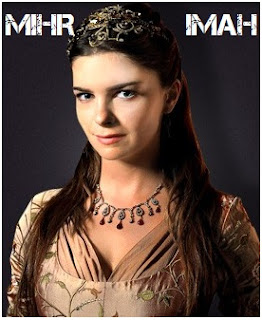 Suleiman's and Hurrem's only daughter, is sultan's most beloved child, played by Pelin Bekiroglu. After witnessing all the shameless attacks on her mother by all of her aunts, she becomes Hurrem sultana's biggest protector. In the show she had romantic stories with Tashlijali bey, prince Mustafa's best friend, and with Bali Bey, Suleiman's man of trust, but she was later on married to powerful Rustem pasha, her mother's biggest ally. She was in every respect her mother's daughter - powerful, smart, strong, unbeatable, beautiful and proud. Not only that she managed to 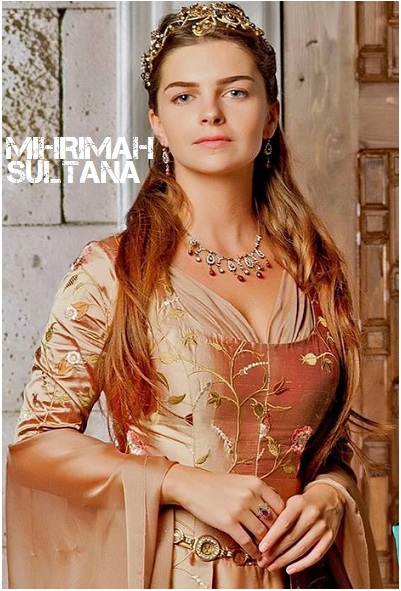 beat all of her mother's enemies, but she also became her father's biggest support after Hurrem Sultana's death, and she helped her brothers Bayezid and Selim rule the empire after Suleiman's death. 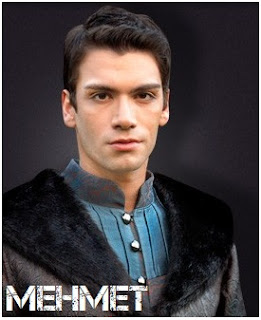 PRINCE MEHMET
Sehzade Mehmet is played by Turkish heartthrob Gurbey Ileri. As Hurrem sultana's oldest son he is her main hope for beating Mustafa and Mahidevran sutlana in their fight for the throne. He is kind, gentle, loves his brother Mustafa despite all of the intrigues, but is in the end killed by a man hired by evil Mahidevran sultana (who will later on be punished for it with the death of her only son Mustafa). 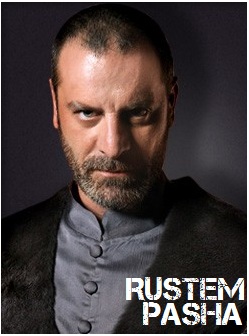 RUSTEM PASHA
Played by Ozan Guven, Rustem has a spectacular rise in the show. From the head of the palace stables he becomes a ruler of a district, a member of sultan's divan, the husband of Mihrimah sultan, and Suleiman's Grand Vizier, all thanks to his faithful support to Hurrem sultana and to his outstanding wits and talents. He had a long and powerful rule in which he became the richest man in the empire. 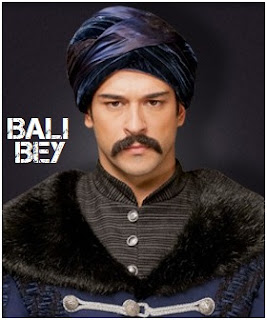 BALI BEY
Malkocogly Bali Bey is played by Turkish superstar Burak Ozjivit. As a brave warrior, he becomes Sultan Suleiman's man of trust and the chamberlain of the Topkapi palace. In the series, he serves as the focus of many romantic scenes as a man who managed to seduce not only many common girls, but also three sultanas - Mihrimah, Esmahan and Aybige, numerous noble ladies and some ambassador's daughters. 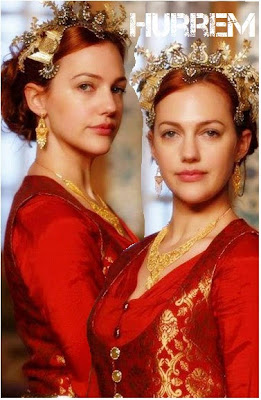 Although Hurrem Sultana is the most popular character (not just in the show) the previous season has ended without her appearing in the scenes, since Meryem Uzerli left the show without any notice after the producers had refused to give her a bigger payment. They replaced her with a new, much older actress, in the fourth season which is yet to premiere in September. Most people think the show will lose its viewership without Meryem.  The show has become so lavish that they had to set up work shops all around the world for the making of costumes. Some of the most renowned Turkish jewellery companies design crowns, tiaras and jewellery specially for the show.Below you can see my fave scene from the show, when Hurrem finally takes over the harem, while above you can see a scene in which a touching Serbian song is used in the Turkish show :)
Posted by DEZMOND at 11:59 PM