SOLDIERS OF THE SUN
While you're waiting to watch Vin Diesel this summer in RIDDICK as the galactic warrior chased by mercenaries, it might not surprise you that Vin already has another space action in plan: "The Hollywood Reporter" writes that he will both star in and produce a potential SOLDIERS OF THE SUN science fiction franchise which is set in a post apocalyptic landscape during a war with alien creatures known as Orcs. The story centres on a group of soldiers on a tour of duty in Mexico, who search for a lost city of gold between battles. Before that Vin is shooting THE LAST WITCH HUNTER about an immortal witch hunter which partners with his natural enemy, a female witch, to stop the covens of New York City from unleashing a plague on humanity.

DINOSAURS IN 'JURASSIC PARK 4'
With a release date set for 2015, the casting rumours for JURASSIC PARK IV have started. John Krasinski is the new name mentioned for a role in the new sequel of the famous franchise. This time, the story will be set in a theme park which has live dinosaurs and they're all tamed including a muzzled T-Rex. There will also be some never before seen dinosaurs and one of them will create chaos in the park which will also have underwater elements. Krasinki will apparently play one of the park workers whose duty is to tame some of the creatures. To be produced by Steven Spielberg, the film will have Colin Trevorrow as the director.

simultaneously with the famous battle in which all the Spartans were killed with their king Leonidas. In RISE OF AN EMPIRE, Sullivan Stapleton plays Greek general Themistocles who is trying to stop the invasion of Persian king Xerxes (Rodrigo Santoro) and his army led by crazy general Artemisia (Eva Green). They lead stunning naval battles!  Battle of Artemisia and Battle of Salamis will be featured in the film.

DEZZY'S HISTORY LESSON
The battle of Salamis was lead at the same time as the small Spartan army lead by King Leonidas was blocking the Persian invasion at the pass of Thermopylae. Over in the straits between Greek mainland and the island of Salamis, Athenian dominated allied navy tricked Persian king Xerxes to sail into the straits where in cramped conditions massive Persian navy couldn't manevour thus losing its bigger number 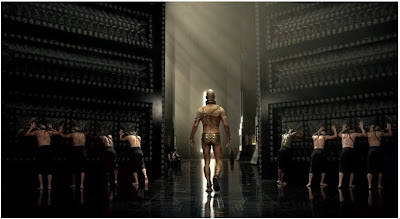 advantage. Seizing the opportunity, the Greek fleet formed in line and scored a decisive victory after which Xerxes returned to Asia. If 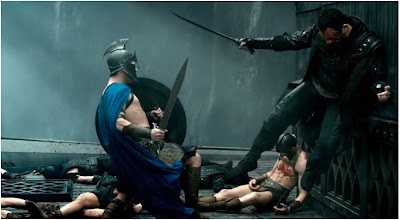 Themistocles hadn't stopped the invasion, many believe that the history of the whole Western Civilisation would've been different today. 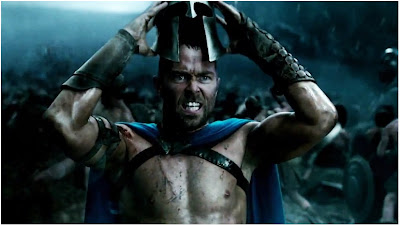 According to some calculations The Greek fleet had less than 400 ships, while Persians had more than 1200!