FROM WARNER BROS!
Good news from the epic front, people! If you miss BBC's MERLIN show which ended, quite disappointingly, last Christmas, the wise wizard from Avalon and Camelot is coming back, but to the big screens. 'Variety' reports that Warner Bros. has hired GAME OF THRONES scribe Dave Hill to pen the script for MERLIN big screen fantasy adventure. No details on the plot so far, but the aim is to create a family friendly franchise at the studio. If you remember, last year Warner had a plan of making ARTHUR AND LANCELOT saga with Kit Harrington from GAME OF THRONES and Joel Kinnaman from THE KILLING in the lead roles, but cancelled the project due to high costs. Now it seems they're returning to medieval times!


LUCKY 7
NEW ABC SHOW
Today, you can also check out the trailer for ABC new drama series LUCKY 7 which should start airing this September in the new Fall season. Based on British TV show SYNDICATE, the series will revolve around a group of seven gas station employees in Queens, New York, 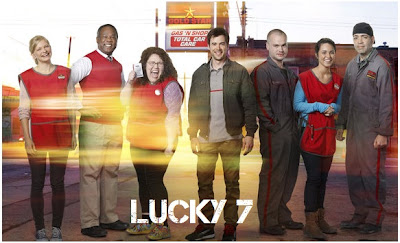 who play the lottery every week and dream about what they would do with the winnings. When they do finally hit the jackpot, the coworkers learn that money may solve some problems, but it creates new ones. The cast includes Matt Long, Stephen Louis, Luis Antonio Ramos and Anastasia Phillips.