DRAGON GREEN DESTINY
Good news from Asia, people. According to 'Entertainment Weekly' Ziyi Zhang is negotiating to return to the sequel of the legendary epic CROUCHING TIGER, HIDDEN DRAGON now titled THE GREEN DESTINY. She will again play Jen Yu, appearing probably in flashbacks which will explain what happened to her character, Michelle Yeoh will also return with Donnie Yen playing Silent Wolf. With the story based on the book "Iron Knight, Silver Vase" by Du Lu Wang the shooting should begin next spring. As I've reported before, Ziyi will also join Takeshi Kaneshiro in John Woo's THE CROSSING epic drama which set in the midst of the Chinese Revolution during the late 1940s, follows couples who flee by ships to the island of Taiwan.


OLIVIA MUNN IN MORTDECAI
WITH JOHHNY DEPP, EWAN MCGREGOR
Another gorgeous lady, Olivia Munn, has joined Johnny Depp's MORTDECAI. Based on   the Kyril Bonfiglioli novel "The Great Mortdecai Moustache Mystery", and with Gwyneth Paltrow and Ewan McGregor also in the cast, the film will see Johnny Depp playing an art dealer, Charles Mortdecai, who searches for a stolen painting rumored to contain a secret code that gains access to hidden Nazi gold.
JUDI DENCH & DUSTIN HOFFMAN IN BBC'S ESIO TROT
In TV news, Judi Dench and Dustin Hoffman will star in BBC's adaptation of Roald Dahl's ESIO TROT. The 90 minute TV movie, to be directed by  Richard Curtis, follows Mr Hoppy (Hoffman), a retired bachelor who has a secret love for his neighbour Mrs Silver (Dench). However, she only gives her attention to her pet tortoise Alfie. The shy Mr Hoppy's attempts to talk to Mrs Silver usually end in some form of calamity. Mr Hoppy then comes up with a possibly ingenious idea to win her affections, after he learns of her wish for Alfie to be bigger.


EPIC 'POMPEII' TRAILER
KIT HARINGTON, EMILY BROWNING, KIEFER SUTHERLAND
And here it is, here it is: after we've seen the first pic from historical epic POMPEII two days ago, now we have the spectacular and atmospheric first trailer! Opening in cinemas

next February,  and set in the days leading up to the eruption of Mt. Vesuvius, the film will see Kit Harington playing a slave on a ship heading for Naples who works to get home to save the woman (Emily Browning) he loves and his best friend, a gladiator trapped inside the city's coliseum! As the city is slowly buried in volcanic ash, he also comes face-to-face with the murderer of his family. Kiefer Sutherland and Carrie Anne Moss play Emily Browning's parents!

Ancient city of Pompeii along with Herculaneum and many villas in the surrounding area, was mostly destroyed and buried under 4 to 6 m of ash and pumice in the eruption of Mount Vesuvius in 79 AD. The eruption was cataclysmic for the town. The site was again discovered in the 16th century with the objects that lay beneath the city well preserved 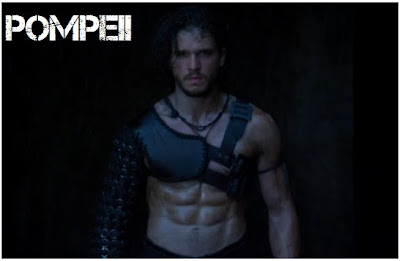 for thousands of years because of the lack of air and moisture. You could even see exact positions in which all of the people died. Most of the people didn't die from ash suffocation but from extreme heat of 250*C

which instantly killed them even if they were within buildings. Ironically, the eruption occurred on August 24, just one day after Vulcanalia, the festival of the Roman god of fire, including that from volcanoes.