I have recently informed you that Phillip Noyce is preparing to direct the movie adaptation of Lois Lowry's novel THE GIVER. The new info is that young Brenton Thwaites who leads the cast is now being joined by Meryl Streep and Jeff Bridges. The story is set in the future where the entire range of human emotion has been forgotten. In the society, The Giver (Jeff Bridges) has been given the right to remember the past in case it is deemed necessary to make use of it. A young boy named Jonas (Brenton Thwaites) has been given the right to become the next Giver and his life is thrown into question when he begins his training with an elderly Giver (Meryl Streep). Meryl is also joining Robert De Niro in THE GOOD HOUSE as a New England realtor and not-so-recovering alcoholic with a perfectly compartmentalized life. De Niro will play her old flame who comes back into her life.


LEONARDO DICAPRIO IS
VIKING 'KING HARALD'
Deadline reports that Warner Bros. and Leonardo DiCaprio are teaming up for a viking epic KING HARALD on the 11th Century conqueror who has been called the last great

Viking king. King Harald was King of Norway for two decades, but his quest for power and thirst for battle led to his being exiled for a time to Russia and then returning in triumph. The Braveheart style movie sees DiCaprio returning to the idea of playing a Viking, since he had plans of shooting one such film before with Mel Gibson directing.
BBC 'THE ARK' WW1 SERIES
In other historical news, BBC One is preparing new, six part drama on World War One. THE ARK will star Hermione Norris, Suranne Jones and Oona Chaplin and will mark the 100 years since WW1 in a story of a team of doctors, nurses and women volunteers work together to heal the bodies and souls of men wounded in the trenches. With rich and complex characters the series will explore the depth and impact of love and loss in the heroic times.


MATT BOMER & MELISSA MCCARTHY
BUREAU OF OTHERWORDLY OPERATIONS
Meanwhile, after HOW TO TRAIN YOUR DRAGON 2, which recently added brilliant Cate Blanchett to the cast, another animated movie is borrowing voices from new stars: 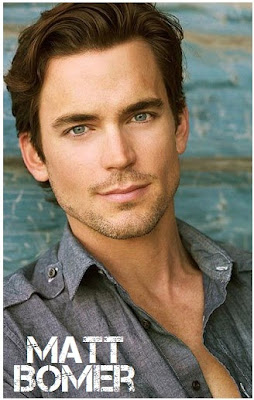 Dreamworks' B.O.O. BUREAU OF OTHERWORDLY OPERATIONS, which already has Melissa McCarthy, has signed Matt Bomer and Rashida Jones too.  Seth Rogen voices an amateur ghost named Jackson Moss, who works for the Bureau of Otherworldly Operations. The top-secret government agency is staffed with ghosts and is dedicated to protecting humans from evil hauntings. He and his partner Watts (Melissa McCarthy) uncover a plot to destroy the agency and go on a mission to take down the agency's Most Wanted Haunter and save the world. Rashida Jones lends her voice to Moss' ex wife, with Matt Bomer being her new hubs.
Posted by DEZMOND at 11:59 PM