Well, with the production scheduled to start in January, we have new rumours about the casting choices for STAR WARS VII circling around the net! After the news that Harrison Ford, Carrie Fisher and Mark Hamil will return in their old roles, along with the possible return of Ewan McGregor, the word is that Alex Pettyfer and Rachel Hurd Wood have auditioned for the roles of Luke Skywalker's son and Princess Leia's daughter. Apparently other actors are still coming in and auditioning for the coveted roles. The story of the science fiction, to be directed by STAR TREK helmer J.J. Abrams, is said to be set thirty years after RETURN OF THE JEDI. You've seen Pettyfer most recently in THE BUTLER.It was previously rumoured that Zac Efron and Ryan Gosling tried out for the roles of Han Solo's and Skywalker's sons.

In other news from the fantasy genre, Dwayne Johnson fronted fantasy action LORE has found its director in David Green who replaces Barry Sonnenfeld who apparently wanted too much money for the budget.  The movie tells the story of a group of shepherds who serve as the world's last line of defence against a horde of mythological monsters.
CATE BLANCHETT & ROONEY MARA TO GO LESBIAN IN CAROL
Meanwhile, Deadline reports that Rooney Mara will join Cate Blanchett in CAROL, the movie adaptation of PRICE OF SALT book, a story of a burgeoning relationship between two very different women in 1950s New York. Rooney Mara will be a young woman working in a department store and hoping for a better life, while Blanchett is playing a wife trapped in a loveless marriage who’s desperate to break free but fearful of losing her daughter in the process. 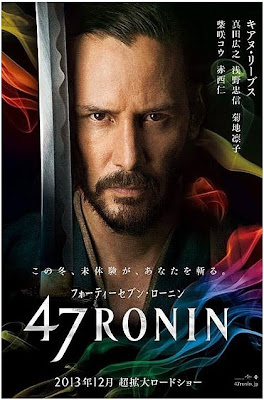 Check out the new international poster and also a new international trailer for Keanu Reeves' Asian epic 47 RONIN coming out this Christmas! From ancient Japan's most enduring tale, the epic 3D fantasy adventure 47 Ronin is born. Keanu Reeves leads the cast as Kai, an outcast who joins Oishi (Hiroyuki Sanada), the leader of 47 outcast samurai. Together they seek vengeance upon the treacherous overlord who killed their master and banished their kind. To restore honour to their homeland, the warriors embark upon a quest that challenges them with a series of trials that would destroy ordinary warriors.
Posted by DEZMOND at 11:59 PM