THE BEST AND THE WORST DRESSED LADIES AT 2010 OSCARS

Since I guess most of you would agree with me that this years Oscars were boring when it comes to the awarded and nominated artists, let's immediately leave that hoopla aside and turn to something you all like best - trashing the chics and freaks from the red carpet :) Just click on these pictures to see the shine and the crime of last nights Oscars. 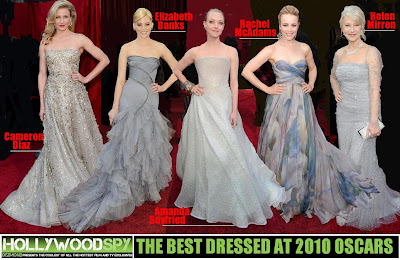 I have to notice that the avatarish blue was the colour of the evening, and the winning dresses were all in that tone. The best dressed ladies at 2010 Oscars were: Cameron Diaz (who is usually the worst dressed, but this time she was stunning in silver embellished Oscar de la Renta), Elizabeth Banks (simply divine in Versace), Rachel McAdams (whose Elie Saab floral gown has helped her shine even though she lacks personal charisma), Amanda Seyfried (although a bit too plain in Armani, the line of the dress is still very refined) and Helen Mirren (who looked profound and sexy even though she's in her late 60's). I must admit I was deeply disappointed with Kate Winslet who for the first time wasn't the queen of the red carpet. 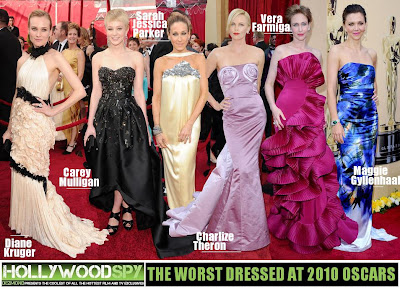 Most of the actresses came in very disappointing outfits, so it wasn't difficult to choose the biggest freaks among them: Diane Kruger (who always dresses horrible), Carey Mulligan (I don't know which was worse - her hair, her dress or those monster shoes?), Sarah Jessica Parker (she should sue Chanel for that fashion atrocity she was sporting on herself), Charlize Theron (maybe she thought her gown had its own sense of humour, but it was nasty), Vera Farmiga (nominated for the first time and then eaten alive by a ruffled monster of a dress) and Maggie Gyllenhaal (who looked like a Navii zombie).
So who were your chics and freaks of 2010 Oscars?
Posted by DEZMOND at 3:15 PM