KELLAN LUTZ IS POSEIDON IN TARSEM'S "WAR OF THE GODS"

It's becoming rather obvious that Tarsem Sing's upcoming epic adventure "War of the Gods" will be full of beautiful young people in the cast. As "MovieWeb" reports young Kellan Lutz ("The Twilight Saga: Eclipse") has signed on for a role in the film. He will portray the vengeful sea god Poseidon. "War of the Gods" also stars Henry Cavill ("The Tudors") and Freida Pinto. 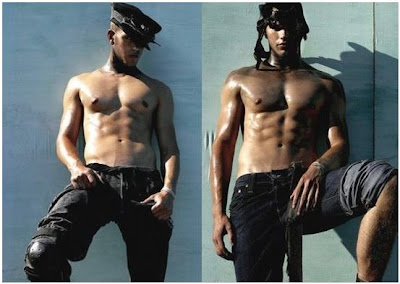 The story follows Theseus (Cavill) who sets out to defeat the older Greek gods to restore balance to mankind. Pinto will play Phaedra, an oracle who joins Theseus on his quest while Mickey Rourke will play King Hyperion. Tarsem ("The Cell", "The Fall") will give the story his usual directorial touch which means that the movie will be visually breathtaking, stunningly creative and mindblowing. The production starts in April.
Posted by DEZMOND at 9:41 PM