LIAM HEMSWORTH WILL BE ENJOYING SOME "ARABIAN NIGHTS"

It's seems that those handsome Australian Hemsworth brothers are enjoying some real nice times in Hollywood these days. After his older brother Chris starred in "Star Trek" and scored the lead role in "Thor" younger brother Liam Hemsworth is climbing up in Tinseltown as well. According to "The Hollywood Reporter" Liam has signed on to star in 3D action adventure film "Arabian Nights", directed by Chuck Russell. This period epic will center on a young commander (Hemsworth) who, after his king is murdered in a coup, joins forces with Sinbad and Aladdin to rescue Queen Scheherazade. 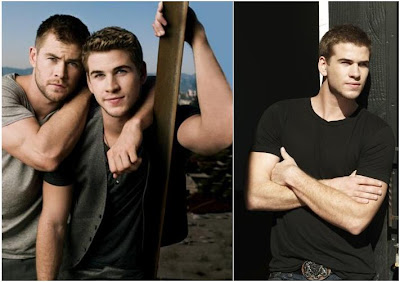 Mostly known as Chris' younger brother and the boyfriend of teen cutie Miley Cyrus, Liam has yet to build up a career in America, although back in his Australia he was a TV star seen in "Neighbours", "McLeod's Daughters", "Home and Away" and this year he has a movie "The Last Song" with Miley.
Posted by DEZMOND at 9:17 PM