"KICK-ASS: CREATING THE COMIC, MAKING THE MOVIE" FROM TITAN BOOKS

Now this is a definite must-have for all the fans of the upcoming "Kick-Ass" movie. One of my favourite publishers "Titan Books" has just released a cool new book "Kick-Ass: Creating the Comic, Making the Movie" promoting the long awaited film. 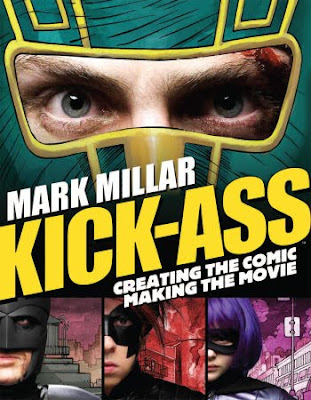 This is the essential companion book for the "Kick-Ass" movie based on the bestselling comic book series by Mark Millar (writer of the graphic novel "Wanted", which became a smash-hit movie) and artist John Romita Jr. This luxurious, 180 pages book will be your guide through the film and its making, offering you Millar's early comic book script pages, eye-popping Romita art, including new pages drawn especially for the movie, exclusive contributions and interviews with the cast and crew and hundreds of movie photos, sketches, storyboards and pieces of production art. You can order this cool book over at Titan's website.

As you know "Kick-Ass" follows Dave Lizewski an unnoticed high school student and comic book fan with a few friends, who lives alone with his father. His life is not very difficult and his personal trials not that overwhelming. However, one day he makes the simple decision to become a super-hero, the self-styled vigilante Kick-Ass, even though he has no powers or training. What happens when an ordinary kid in a spandex costume comes face-to-face with the criminal underworld? Starring young Aaron Johnson, Nicolas Cage and Mark Strong, the film is out this April.
You can also check out the new music video with the charming main song from the movie, performed by less charmingMika.