You know how lavish "Flash Gordon" is my favourite space opera, and how I'm not really happy with Breck Eisner being the director of the new adaptation of this popular comic, but here's what he said few days ago about the upcoming movie:
Matt Sazama and Burk Sharpless are working on the script right now. We're on the second draft now. It should be in the studio in a month or two. 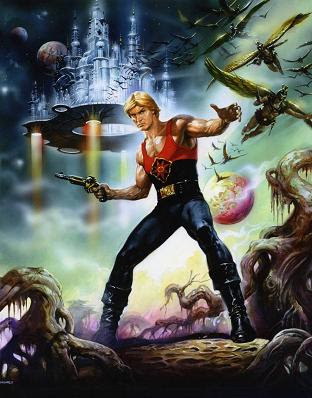 I'm very bullish on it. But it's a giant movie and will take a long time to do. Flash Gordon is a project I've been pursuing for years, it's a real passion of mine. The writers have been breaking story the past couple of months, and we have a couple months to go until the draft goes into Sony. Assuming they achieve everything we talked about, I think it will be a really great script. It's not a remake of any movie that's been done before. Nothing to do with the camp of the '80s, nothing to do with the serials of the '50s. It's definitely based on the Alex Raymond strips from the '30s and '40s, told from the point of view as if he was redoing the strips today. The audience that was reading the strips back then was a very different audience than today's audience. It's an action-adventure, very dynamic, aggressive, with a really strong central character.
Let us hope that this potential blockbuster won't be ruined by a bad directorial vision and bad casting. I'm keeping my fingers crossed that this movie will manage to beat the amazing 1980's film starring Sam Jones.
Posted by DEZMOND at 9:22 PM