CHRISTINA RICCI AND LIAM NEESON KNOW WHAT AWAITS YOU IN "AFTER.LIFE"

How do you save yourself if you are already dead? The answer awaits you in the new spooky horror "After.Life" with Christina Ricci, Liam Neeson, Alfred Molina and Justin Long. 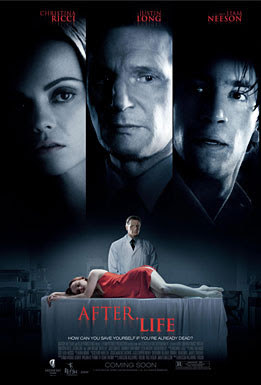 Coming out April 9, this movie has more than scary plot: after a horrific car accident, Anna (Christina Ricci) wakes up to find the local funeral director Eliot Deacon (Liam Neeson) preparing her body for her funeral. Confused, terrified and feeling still very much alive, Anna doesn't believe she's dead, despite the funeral director's reassurances that she is merely in transition to the afterlife. Eliot convinces her he has the ability to communicate with the dead and is the only one who can help her. Trapped inside the funeral home, with nobody to turn to except Eliot, Anna is forced to face her deepest fears and accept her own death. But Anna's grief-stricken boyfriend Paul (Justin Long) still can't shake the nagging suspicion that Eliot isn't what he appears to be. As the funeral nears, Paul gets closer to unlocking the disturbing truth, but it could be too late: Anna may have already begun to cross over the other side.