After a long search the latest rumors say that the short list of actors to play "The First Avenger: Captain America" has now basically got down to one. According to "Fox 411" Emily Blunt's and everybody else's favourite John Krasinski is now the most likely candidate to take the lead role: 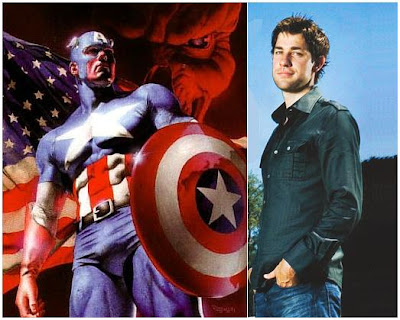 Insiders at the Marvel compound tell "Fox 411" that he is close to landing the superhero gig of his life. John, who plays Jim on "The Office", has appeared in front of producers repeatedly since the start of the new year and since rumors began in February. John has read 4 times and is doing screen tests. He has screen tested 2 times so far. It's very likely that he will be the new Captain America. He is a favorite among the key decision makers and has been asked to come back for more this week.
Directed by Joe Johnston the film is planned as one of next year's biggest summer cinemattractions.
Posted by DEZMOND at 10:35 PM