SECOND TRAILER AND A LOVELY POSTER FOR "PRINCE OF PERSIA: THE SANDS OF TIME" 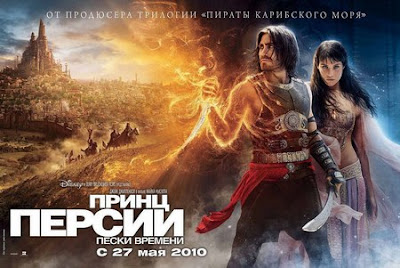 Here's the second trailer and the most beautiful Russian poster for one of my most anticipated movies this year "Prince of Persia: the Sands of Time". The new trailer reveals a lot of scenes which weren't seen in the first trailer. As you know the film is set in Persia where a nefarious nobleman covets the Sands of Time, a legendary gift from the gods that allows its possessor to turn back time. Whoever owns the Sands of Time has the power to rule the world, and this villainous lord would use that power to enslave all of humanity. The only person capable of defeating this tyrant and saving the world is Dastan (Jake Gyllenhaal), a youthful prince. Now, with princess Tamina (Gemma Arterton) by his side, Dastan will attempt to prevent the Sands of Time from falling into the wrong hands.