Fans of "Legend of the Seeker" have once again shown their epic powers :) Amazing 420 people have taken part in our ELVEN BLOND poll choosing sensationally beautiful Tabrett Bethell as the most magical blond with thunderous 309 votes (73%). 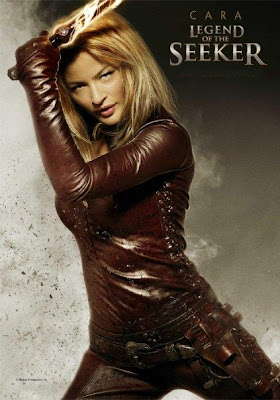 Another Mord Sith beaty from the same show, enchanting Jessica Marais took second place with 71 votes (16%). I'm not surprised with your votes - Tabrett is the magic spice which gave "Legend of the Seeker" new, irresistible, taste in the second season. One of the most beautiful Australian actresses, Tabrett Bethell has charmed the viewers of the popular show with her witty portrayal of Cara, the female warrior with alluring beauty and generous heart hidden deep inside her flawless body. You can also see Taby in some Australian movies - "Anyone You Want", "The Clinic", "Strangers Lovers Killers". She has it all - the divine looks, the profound acting talent and heavenly charisma. 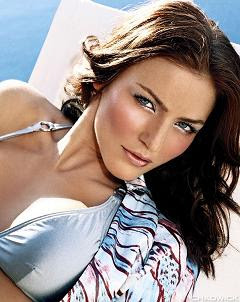 I've promised you that we shall take care of all of you brunette fans, so our new poll starts immediately. Who is your MAGICAL BRUNETTE ? Which one can hypnotize you with her dark hair and her passionate eyes: Welsh queen Catherine Zeta Jones, Indian goddess Aishwariya Rai, Mexican fire Salma Hayek, British rose Emily Blunt, velvet princess Rachel Weisz or the midnight lily Kate Beckinsale? You can vote as much as you like in the following two weeks.
Posted by DEZMOND at 10:04 PM