ANGELINA JOLIE WANTS TO BE "MALEFICENT"?

HOLLYWOOD SPY has informed you recently that Disney is planning to make a darker version of the "Sleeping Beauty" told from the point of Maleficent, the evil lady who cast the original spell on the sleeping princess. Be honest and admit that the first actress who appeared in your mind for the role was Angelina Jolie :) Well, according to the fresh news from "The Los Angeles Times" Angelina Jolie is actually interested in becoming the fairy tale villain. 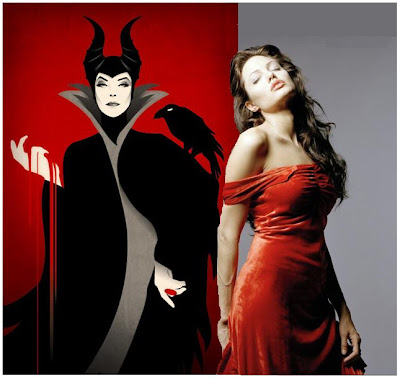 The first rumors about "Maleficent" started last year and both Angelina Jolie and director Tim Burton had been linked to the post modern take on this classic. It's still not clear whether Burton will really helm this project, but apparently Angelina is very much interested in being involved in this project. I wonder, if she gets the role, will Brad Pitt play the Sleeping Beauty? :))
Posted by DEZMOND at 6:58 PM