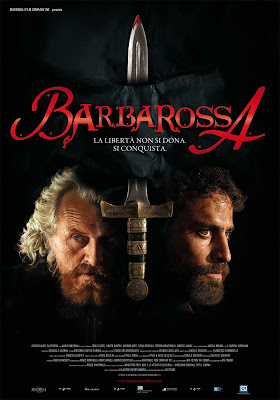 "Barbarossa" is a historical movie, which premiered this October in Italy. Directed by Renzo Martinelli and shot last year in Romania, it stars Rutger Hauer as famous Frederick I, one of the most famous of German emperors. He had a majestic appearance with a long red beard and so the people called him Barbarossa, or Red-Beard. He came to the throne in 1152.
My Italian is bad, but as far as I got it, the movie deals with the Lombardian revolt from the 12th century when Italy was a part of the Holy Roman Empire. Frederick Barbarossa came over the Alps with an army of a hundred thousand German soldiers to deal with the uprising. He put the city of Milan under a very long siege. Its fortifications were destroyed and many of its buildings ruined. But even then the spirit of the Lombards was not broken. Milan and the other cities of Lombardy united in a league and defied the emperor. He called upon the German dukes to bring their men to his aid but in his campaign against the Lombards Frederick was unsuccessful. His army was completely defeated and he was compelled to grant freedom to the cities of Lombardy.
After that Frederick devoted himself to making Germany a united nation, he also raised an army of Crusaders in the German Empire and with one hundred and fifty thousand men started for Palestine. But in the history, he's probably most famous for his bizarre death. He didn't die on a battlefield, but in a river in which he fell while traveling to one of his Crusades: Barbarossa's heavy armor made him helpless and he was drowned.
You can watch the trailer for this movie over at my official YouTube channel.
When talking about this movie, I must mention my dearest Romanian friend Andreea Tanasescu who was involved in it. She is also known for her amazing casting work in Tarsem Singh's "The Fall", Joel Schumacher's "Blood Creek" with Michael Fassbender and Henry Cavill, "Bloodrayne", "Gunpowder, Treason and Plot" ....
Posted by DEZMOND at 8:35 PM

This looks interesting. And with Rutger Hauer in it, I have another reason to watch it when it comes out. :)

Love historicals but it seems Hollywood neglects my fave genre.

Yes, the trailer is also nice. It's a nice historical movie for a weekend afternoon. Too bad it's all in Italian. But we have subtitles :))

Avalon, that's our biggest complaint always - we don't have enough epics and historicals.

Bels, I didn't know you're a fan of Rutger :) Then you must have been a fan of VEDLOCK and LADYHAWK :)))

I don't remember much of Wedlock, but I think it was a decent movie. Ladyhawke is cult movie for sure. I just caught it on TV recently. They all looked so young(er), especially Matthew Broderick. :))
Rutger Hauer starred in so many interesting films. At least interesting to me personally. :) Blade Runner, Ladyhawke, Flesh+Blood, Wedlock, Split Second, Buffy the Vampire Slayer, The 10th Kingdom...

I must admit I've never watched BLADE RUNNER. I did try a few times, but the beginning was always so tremendously boring to me, that I just couldn't go on :)