NEW UPDATES ON "THE ADVENTURES OF TINTIN" AND "HOBBIT"

The official news is that "The Adventures of Tintin: The Secret of the Unicorn" is entirely shot but it will take two more years to finish its whole production. Although "Paramount" has put December 23rd, 2011 as its release date, Peter Jackson has recently told BBC that the movie is done but it is in a rough state and it will take a very long time to render it. It is interesting that Steven Spielberg has spent 30 days directing "Tintin" this spring and then he handed it over to Peter Jackson, who is now supposed to work on it for two years. 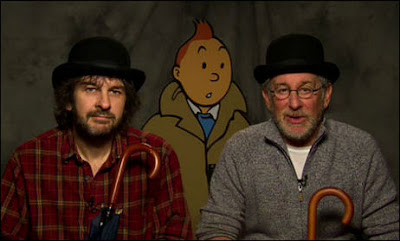 At the same time, Jackson also gave some new update on "Hobbit": "We're currently working on the second script which we hope to have completed by the end of this year or beginning of next. When the scripts are completed, we can begin with the exact calculation of the necessary budget. We hope to start filming in the middle of next year. However, we've received no green light from the studio yet." It will take more than a whole year to shoot the two complete "Hobbit" films, but the second part is not expected to be released before 2012, while the first one is also scheduled for December 2011.
Posted by DEZMOND at 9:20 PM

The romantic query letter and the happy-ever-after said...

I read Tintin as a girl and watched the cartoon with my little one here in Canada. I'll be glad to see what they do with the movie.
The Hobbit will no doubt be brilliant under Jackson's guidance.
Thanks for sharing and all the very best.

We will have visually spectacular movies if nothing else :)) The strange thing is that they are coming out the same month.

Yep, but we have waited for AVATAR for ten years, so this is nothing compared to that :))

30 days of shooting, then 2 years of post production. Sounds like Avatar. Is it mostly CGI animated like Avatar also? I'm not familiar with this project. However, I'm looking forward to this movie. :)

I'm not that interested in Hobbit, but I really wish they could speed things up with this film. There are a lot of people anxious to see it. And they have been waiting for it for a some time now.

well, it will obviously have a lot of special effects and other of JAckson's favourite stuff :))

I would be interested in HOBBIT only if the Hobbits didn't overtake the whole film, but then it would be an illogical project :))